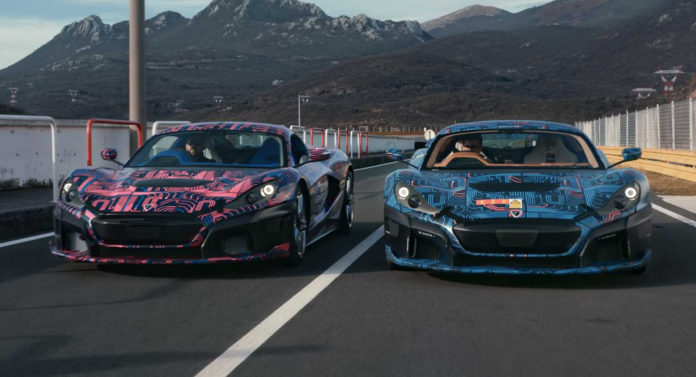 Rimac released the prototypes of its electric hyper car C_Two on the track. The company showed off the extraordinary performance of two test prototypes with different features in the video it shared.

Rimac’s electric hyper car C_Two surfaced at the Geneva Motor Show last year. The company has now released a brand new video with car prototypes landing on the track. The images include test drives of the car’s two prototypes, and the extraordinary performance of the vehicles is on display.

The prototypes that stand out with their striking performances came to the track for different test purposes. One of the tools focuses on suspension components and handling, making C_Two the most efficient. The other vehicle is being tested to analyze the aerodynamic structure of the car and to ensure C_Two performs optimally.

Both prototypes do not contain components that are unique to each other. For example, advanced suspensions in one of the vehicles are not used in the second vehicle. Likewise, the aerodynamic features in one are not found in the other vehicle. Judging by the test images, Rimac is making good progress. The cars look pretty fast on the track, and Rimac seems to be making an important effort to ensure that C_Two can take corners comfortably.

Rimac emphasizes that C_Two has about 2,000 horsepower (1,491 kW) transmitted to all four wheels, but is easy to drive at low speeds. The video shows how the monster turned into a racetrack on the racetrack, even if it was not driven at very low speed.

Rimac will continue prototype testing for a while and start deliveries towards the end of the year. C_Two is expected to be re-exhibited at the 2020 Geneva Motor Show.

NASA: Astronauts on Mars Will Use Lasers to Communicate with Earth