Home Celebrity Rihanna Soon Back With “R9”: She Works With The Neptunes

Rihanna is currently preparing her new album R9. The starlet is back in the studios and she is doing a whole new collaboration! The Rihanna fans are eagerly awaiting the release of R9, the new album from the star. The latter has teased a collaboration with The Neptunes!

Right now, Rihanna is on all fronts and she works a lot. Indeed, the starlet has released her new Savage X Fenty lingerie collection for Valentine’s Day. Then, for months, she has been preparing her big comeback on stage. The singer is working on her brand new album R9 and she keeps talking about it to her fans. In addition, they are increasingly impatient and hope to release the album very soon.

In addition to working on her brands, Rihanna has promised to release a new album. So, for months, she has been trying the arrival of R9. The starlet often gives news to her fans to reassure them. She is well in the studios to record new songs and she promises several collaborations. Besides, the star could work on music with The Neptunes! 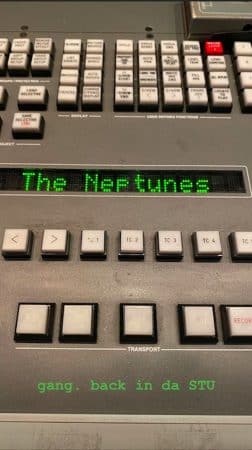 Rihanna soon back with “R9”: she works with The Neptunes! Last Thursday, February 13, Rihanna took some photos on Instagram while she is in a recording studio. The singer is taking care of her new album and she is happy to be able to tell her fans about it. Thus, on the photo, we can see written the name The Neptunes. The star is said to be working with Pharrell Williams and Chad Hugo on her new album. Then she wrote a little more message. “Back to the studio” . It should please fans and everyone is looking forward to hearing their new songs.

Rihanna is thus preparing a golden album with numerous collaborations. However, not long ago, the star clarified things and denied a few rumors. In an interview for The New York Times’ T Style , she said she won’t be collaborating with Drake, Lady Gaga. As a result, fans should not expect to see her sing with these two stars for R9.