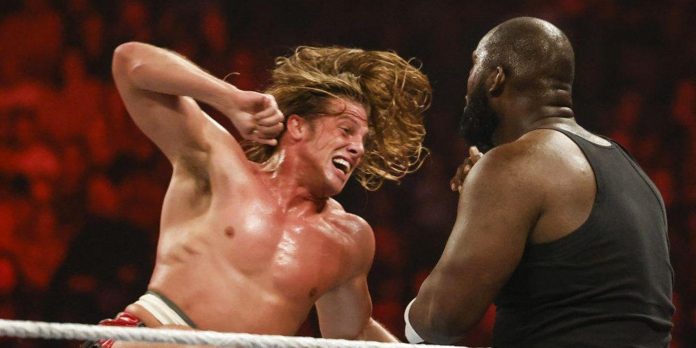 No one will talk for long about Riddle vs. Omos from the June 20 edition of Monday Night Raw, but he still showed why Riddle is a legitimate superstar for WWE. It wasn’t some five-star classic that Dave Meltzer would be writing about for the next decade, and it’s unlikely that the echo of the results would be particularly far-reaching. Unless Omos wins “Money in the Bank,” which is a completely different conversation.

Instead, what’s remarkable about the match is that it wasn’t boring, boring, or slow. So far, these have been the trademarks of Omos’s fights, and it’s impossible to blame him, because he is 7 feet 3 inches and weighs about 400 pounds. However, Riddle did what Bobby Lashley has been unable to do in recent months, namely, get a solid match from the big man. We’ve seen spikes of this during his competition against AJ Styles, but Phenomenal hasn’t been in the best shape lately.

Meanwhile, Riddle enjoyed a slow and steady progress to the top of the Monday Night Raw main card. WWE gets bored of these favorite projects all the time, and they close the plug before they have a real chance to get started. History is littered with former outstanding NXT players who simply didn’t succeed after their call-up. However, the booking of the RK-Bro was mostly accurate, and Riddle’s momentum is now more than just a trifle from a legend like Randy Orton. Riddle himself is a real superstar, both in terms of his character and in terms of working in the ring.

There is a dichotomy in Riddle’s character that some WWE wrestlers lack. He is able to make the audience laugh during his promos, but that’s because he just remains himself. When it comes to fighting inside wrestling, fans know that he has the experience of a real UFC fighter, so when he lights up, it has weight. Moreover, few performers working right now can arouse sympathy like Riddle. On the one hand, it’s his great sales, and on the other, his relationship with the injured Randy Orton, and it works great.

Viewers can count on their fingers the number of tag teams that actually feel like brothers. One could even argue that the RK-Bro feel more united than the Uso, and they are actually a family. WWE allows Riddle to use this emotional connection, as well as perform at a high level in the ring, and as a result, Riddle became the new star of the main event. He hung out with Roman Reines and made a one-on-one match believable. He lost, but it doesn’t look like it hurt him. The point is that he immediately found himself in the main event with the biggest draw in the company and hung up. The post-match beating of Riddle by Omos caused more reaction than anything he did to Lashley, which speaks to the former Deep Waters and his ability to sell and evoke sympathy. Omos looks like a monster. Riddle looks like a star. Mission accomplished, WWE.