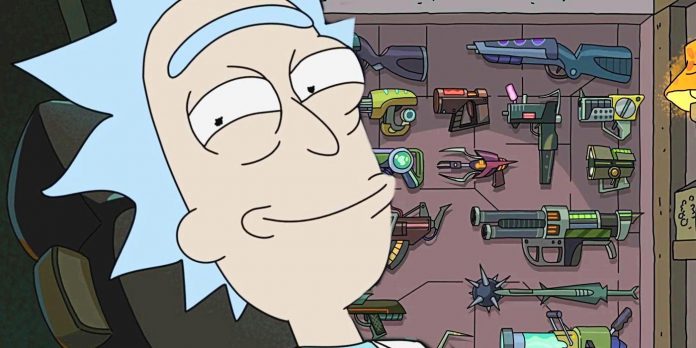 It can be difficult to keep track of the sci-fi rules of the world of Rick and Morty, but one fan theory regarding Rick’s lab coat explains some potential show plot holes. Throughout its five seasons, Rick and Morty placed itself in an interesting, ambiguous scenario of not taking itself too seriously but also providing the viewers with a fleshed out and engaging universe they’d theorize about. The biggest examples of that were the dozens of Evil Morty theories, but there are also smaller, more simple Rick and Morty theories designed to make such a peculiar sci-fi world easier to decipher.

As interesting as the big, game-changing Rick and Morty theories can be, the show has a history of purposely not paying off a lot of its setups. The possibility of an overall wider Rick and Morty arc, such as Evil Morty or who killed Rick’s family, would usually outshine the episodic nature of the show, with theories trying to anticipate the next Rick and Morty reveal gaining more track than some episodes itself. That led to the creative “Never Ricking Morty” episode, in which the creators of the show make a funny commentary on the “episodic vs. long-running” conflict by placing Rick and Morty in a never-ending loop of anthology stories. Therefore, in Rick and Morty, the simpler theories usually have a bigger chance of being proven right than the ones that try to guess future events.

For example, one smart fan theory (via Reddit) regarding Rick’s lab coat helps explain how Rick’s access to his weapons really works, and holds some real credence based on how it works with existing lore. Although each Rick and Morty episode usually sees Rick with a brand new device or invention, there are some recurrent gadgets that Rick can always count on. Rick’s portal gun is the most well-known example, having been used by the character since Rick and Morty’s pilot. The portal gun – or more specifically, the portal gun’s fluid – is by far Rick’s most important invention, and it has granted the character the power to travel through any possible dimensions, provided that such dimension exists inside the Central Infinite Curve. It is usually this power to travel through dimensions that makes Rick an enemy of many, and the highly speculated Evil Morty’s plan also involved a variation of the portal gun. However, according to this theory, Rick’s portal gun liquid also has much more direct use in Rick’s everyday adventures – it helps the scientist access his armory.

On top of the portal gun, other famous weapons and devices used by Rick in his adventures with Morty were the Fleeseeks Box, The Meeseeks Box, the Freeze Gun, the Time Freezing Gun, and the gun that shoots antimatter. What is interesting about most of those devices and countless other Rick guns is how easily Rick can access them during an adventure – Rick simply has to reach into his lab coat pocket. In addition to a seemly infinitely large pocket that can hide from a simple handgun to giant boxes, what is curious about Rick’s coat is how it almost always contains the perfect device for any Rick and Morty adventure. While Rick’s garage has enough space for any possible weapon, Rick’s lab coat certainly does not.

Though infinitely large pockets are a common cartoon trope, it is possible to find a perfect in-universe explanation for Rick’s almost magic lab coat. The fan theory suggests that Rick’s coat contains a small portal made out of the same liquid from Rick’s portal gun that connects the scientist’s pocket to the armory in his garage. As such, every time Rick reaches for his pocket, he is actually traveling his hand straight to his garage, thus being able to grab any weapon he wants. There would obviously have to be some adjustments for Rick to be able to pinpoint the exact gadget he wants from the famous Rick and Morty garage, but the theory suggests that Rick set a touch screen display to make everything easier.

The theory also points out that while Rick often carries one or two other weapons in holsters, most of the tools he uses during his adventures with Morty come off of his coat. That is why Rick never takes his coat off during a mission or in any dangerous place, except when it is part of a bigger plan. The theory also points out how, whenever Rick is not wearing his coat, he has to improvise new weapons. Rick is seemingly aware that he is in a cartoon as Rick and Morty is a very meta show, and given how the infinitely large pocket is such a common trope of animated shows, it would make sense for Rick to have a small portal attached to his large coat. Not only does it find a perfect in-universe explanation for the trope, but it also makes sure that Rick is always prepared, no matter what he and Morty face in Rick and Morty.

The 10 Wildest Weapons in Horror Movies according to Reddit

Actors of the film Gran Turismo Never Have I Ever Star...