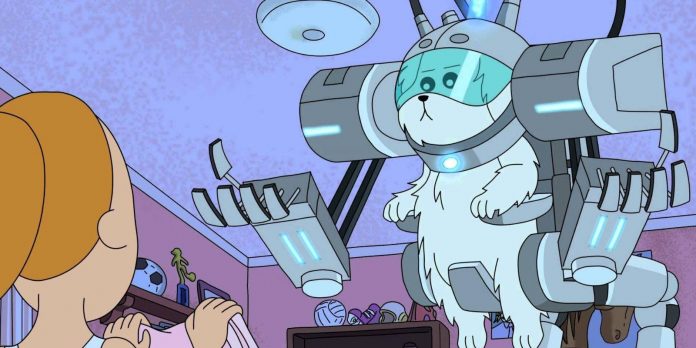 One talented fan of “Rick and Morty“, it would seem, achieved the impossible by creating a cosplay on the super-intelligent dog of the Smith family Snowball in a cyber suit. The series, launched on Adult Swim in 2013, remains one of the most popular animated sitcoms for adults. The show, co-created by Justin Roiland and Dan Harmon, has undergone major changes since it was conceived as a parody of the 1985 science fiction classic Back to the Future.

Focusing on the misadventures of alcoholic scientist Rick Sanchez and his somewhat reluctant grandson-buddy Morty Smith, the series follows the (usually) random trail of the couple’s destruction across the galaxy. Recognized for its originality and dry humor, one of the most beloved aspects of the show is the almost episodic creation of bizarre, often alien characters, many of whom quickly become fan favorites, such as Birdperson, Mr. Meeseeks and Mr. Poopybutthole. . Introduced in the season 1 episode “Lawnmower Dog”, Snowball appears as one of the first quasi-villains of the series. Originally known as Snuffles, the Smith family pet evolves rapidly after Jerry pesters Rick with a request for a device that will make the dog smarter. Predictably spiraling out of control, Snuffles becomes a superintelligent being, abandoning his self-proclaimed slave name in favor of the nickname Snowball and developing his own robotic suit to help free his species from the slavery of humanity.

Link: Why do Rick and Morty Make So Many Horror Villains Good Guys

Now Ricky and Morty’s official Twitter page has shared an incredible complete re-creation of a Snowball from a cosplayer. The feat achieved by AllisonChaseMU showed a dog sitting inside a fully mobile replica of his cyber suit. A very ambitious cosplay character, even from an alien show like Rick and Morty, the costume’s ingenuity quickly went viral on social media.

Although Snowball appears briefly throughout the series in background photos, the character has not fully returned since his departure to another planet at the end of season 1, episode 2. Characters often (and sometimes unexpectedly) return to their ranks, Snowball may reappear in the series, especially in the development of the seventh and eighth seasons. However, while fans seem to be enjoying the return of some of the quirkier original characters, the show will undoubtedly continue to present even more when season 6 of “Rick and Morty” is released later this year.

Rick and Morty, chock-full of mutants and alien life forms, is definitely not an easy cosplay fandom. Almost a year after the season 5 premiere, enthusiasm for the sitcom shows no signs of waning as fans eagerly await news of the return of the show, which is being touted as an unspecified date in 2022. Talented people like Allison continue to struggle. Expressing their affection for the characters last seen in 2013, it can be assumed that Rick and Morty’s fanbase will be able to withstand the wait for season 6.

Who is the repository in AC Valhalla