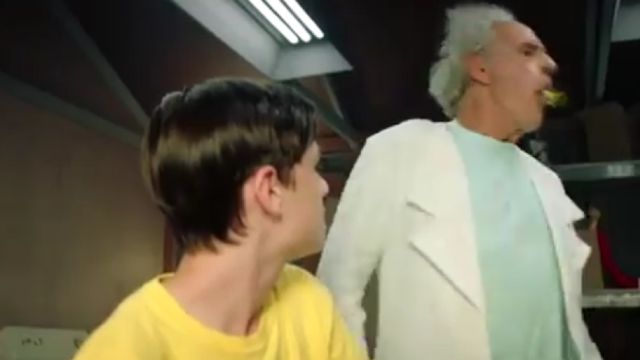 Rick & Morty: With the last episodes of the fifth season about to premiere, Adult Swim publishes a series of clips with Christopher Lloyd as the protagonist.It is not a series or a live action movie, but it is the closest thing to that that we have seen to date. Rick & Morty has a version in flesh and blood, if only in a series of short videos of a proportional nature. Adult Swim surprised locals and strangers when it published the first of them, in which Christopher Lloyd, doc in Back to the Future, appears in the role of Rick. Morty Smith, meanwhile, is played by Jaeden Martell.

If in the first we saw them coming home, in the second Morty gave his partner a good scolding: “You’ve done it again, haven’t you learned anything since the last time?” A wrench, a screwdriver and a cucumber rest on the table. Good old Rick takes the vegetable, puts it in his mouth, and spits it out a second later. He then responds “never” forcefully.

In the next short, Morty lies on the ground and appears to be convulsing. “One hundred years!” Shouts the eccentric character. It is a kind of adaptation of a scene from the animated series.

Rick & Morty and Back to the Future

Each of the shorts references one of the many universes in the Rick & Morty multiverse. The series, which can be seen on HBO Spain, was originally inspired by the movie Back to the Future, an eighties classic in which Christopher Lloyd co-starred alongside Michael J. Fox’s character, Marty McFly. In fact, this version of Rick looks a lot like the wacky professor from the Robert Zemeckis-directed film.

Rick & Morty is about to complete the broadcast of its fifth season. There are only two episodes left, which we can see starting today, September 6, at the same time as in the United States.