Home Entertainment Rick & Morty in Live Action? Christopher Lloyd is Rick In This... 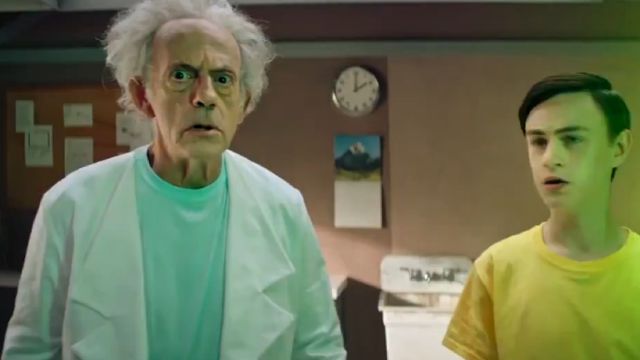 Rick & Morty: The mythical Emmett Brown from Back to the Future participates in this clip of just a few seconds long. Rick & Morty is an animated series, but in these times, any product is susceptible to experimenting with other formats. At the moment, there is no live action series announced, although Adult Swim has offered a small appetizer of what it might look like if it were to come true. Through the official Twitter channel, they have published a very short clip of just 14 seconds long. Enough time to see on screen Christopher Lloyd (Emmett Brown in Back to the Future), who plays Rick Sanchez with a very similar appearance to doc. The role of Morty Smith goes to Jaeden Martell.

With the premiere of the final episodes of the fifth season of the series on the horizon, the video produced by Adult Swim shows both characters transporting themselves through a portal. Rick burps right out of him and comments that they have come home. The fact that they have selected Christopher Lloyd is curious, because somehow it has come full circle. Do not forget that this fiction was originally born as The Real Animated Adventures of Doc and Mharti, a parody of Back to the Future.

The tweet refers to dimension C-132, one of the many universes in the fictional multiverse. It is unknown if this is a clue about what is to come to the series, so we will have to wait for the following episodes to premiere to discover the surprises that its creators have outlined.

The fifth season of Rick & Morty can be followed on HBO Spain, since it is broadcast at the same time as in the United States. The first batch of episodes is available now, while the last two will air from September 6. All previous seasons are available on this same platform.