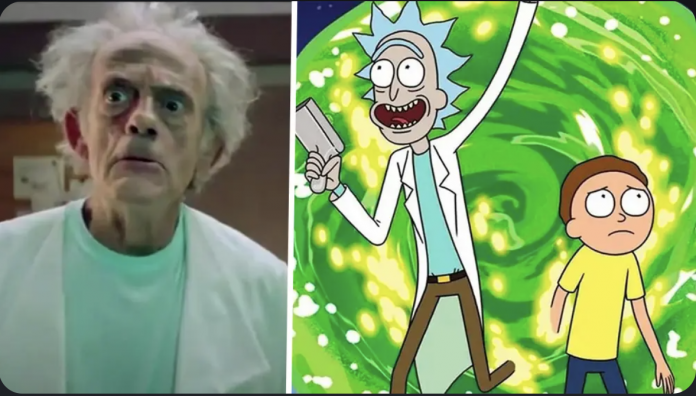 Actors Christopher Lloyd and Jaeden Martell played Rick and Morty, respectively, in a promo for this animated series.

One of the keys behind the popularity of Rick and Morty is that its creators have managed to maintain the interest of the public. The show’s irreverence remains and its occurrences are fresh and engaging.

That is why it has been five successful seasons and surely more are on the way. The fact is that recently the creatives behind this animated program released a tremendous ‘nostalgia bomb’ in the form of a teaser on Twitter.

Christopher Lloyd and Jaeden Martell are now Rick and Morty

It is a video of just 14 seconds, where none other than actors Christopher Lloyd and Jaeden Martell appear, who play Rick Sánchez and Morty Smith, respectively.

Lloyd is a current pop culture institution. Although he has played various roles throughout his career, he is best remembered by many for his great portrayal of Emmett ‘Doc’ Brown in the Back to the Future film trilogy.

The fact is that this character was part of Rick’s inspiration. As for Martell, his path through the seventh art is just beginning. But this 18-year-old has already stood out in the two tapes of the remake of It, as well as in Knives Out.

From what was shared in the message, these versions of Rick and Morty correspond to the C-132 universe. The video has sparked a lot of speculation, especially since there is only one episode left of the show.

Lloyd had wanted to participate in the series for a long time.

Specifically, the last of the fifth season, which will premiere on September 5. Maybe the team behind the series wants to “close big” with Lloyd and Martell participating.

However, it cannot be ruled out that this video is for promotional purposes only.

Although there is no shortage of fans who dream that it is actually a preview of what will come in the sixth installment of the series, which for now has no launch window.

Christopher Lloyd had long expressed interest in participating in Rick and Morty. In a 2018 interview he commented on the show, “I don’t follow it closely, but I’ve seen some episodes and I have to tell you I think it’s a lot of fun.”

To the above, he added “I know it’s a kind of Doc and Marty parody.” When asked if he would participate, he replied after laughing ‘I’d like to, of course. I think it’s a lot of fun. ‘ That was how it all started.