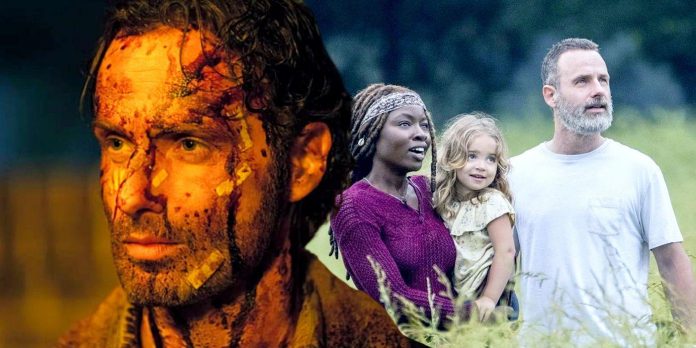 Showrunner Scott M. Gimple reveals new plot details of Rick and Michonne’s long-awaited extra show “The Walking Dead.” The premiere of the series “The Walking Dead”, which premiered on the AMC channel in 2010, is now in the midst of the 11th and final season. Although most of the original characters are no longer involved in the series, viewers were first introduced to the world of the Walking Dead through Sheriff Andrew Lincoln Rick Grimes and a small group of survivors he encounters after waking up from a coma during the first season of the show.

After Rick left the show during season 9 of The Walking Dead, it was announced that the fan-favorite character would receive his own trilogy of additional films. Years passed, and there was no concrete news about the films, until finally this year it was announced on SDCC that Rick would no longer be making his own side films, but would instead be shooting a new show. Notably, the as-yet-unnamed spin-off show will also feature Michonne (Danai Gurira), who first met The Walking Dead in season 3 and then left in season 10 to try to find Rick. The poster of Rick and Michonne’s new spin-off “The Walking Dead” reveals little, but hints that the show will be released at some point in 2023.

Related: Why Daryl Might Be on Rick Grimes’ “The Walking Dead” Show

During the preview of “The Walking Dead Universe” 2022 on AMC (according to EW), the creator of the series and showrunner Gimple provided the first concrete details of the story of the upcoming spin-off. Gimple described the show as an “epic and crazy love story” and teases that both Rick and Michonne haven’t softened over the years. The showrunner claims that more extreme versions of the characters that fans love will return with a new show, including “Rick’s Red Machete.” Check out Gimple’s full comment below:

“This is an epic love story. But this is an epic and crazy love story. These are two people who have been separated for a very long time. They have lived whole other existences, and they need to find themselves again, not to mention each other. And I hope it will be stunning.

“We see this incredibly strong couple, but we also see this Rick in the Red Machete. We see that Michonne who taught the governor something. ”

The reference to Rick’s red machete is significant, hinting that a crazier version of the character he saw in his later seasons of “The Walking Dead” will return. Rick, as you know, used a machete with a red handle not only to destroy walkers, but also to kill enemies-people who got in his way, primarily Gareth during season 5. As for Michonne, Gimple’s reference to her interaction with the governor goes back to seasons 3 and 4, when she stabbed him in the eye and then pierced him with her katana.

While much remains unknown about Rick and Michonne’s new spin-off show, Gimple’s latest comments suggest the series will be as hardcore and bloody as fans of the show expected, but with a romantic element. After all, as Gimple explains, Rick and Michonne have been separated for a long time in the world of The Walking Dead, so the two characters will probably fight their hardest to stay together. Since the release of the “Walking Dead” spin-off by Rick and Michonne is expected at some point in 2023, it is likely that additional details and promotional materials will be published before the end of 2022.

The lead role of the Super Mario movie has been revealed!