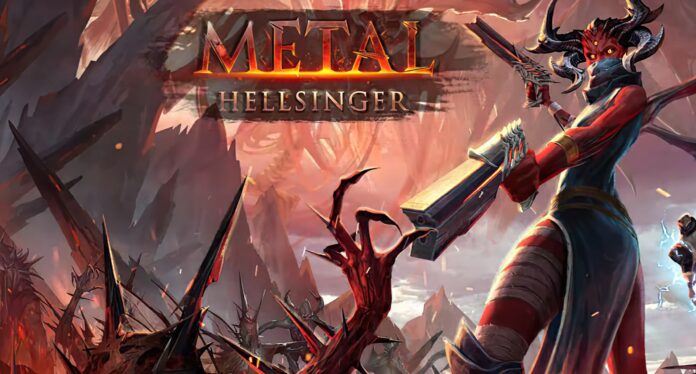 A new DOOM-like game is on its way from Fancom, developer of Conan Exiles, where you can smash the hell of metal music. The rhythm-based action adventure game Metal: Hellsinger has been announced and the first trailer has arrived.

Metal: Hellsinger, the first-person shooter game full of demonic enemies, powerful weapons and metal music, was officially announced in the trailer. Adapting to the rhythm of metal music is as important as killing deadly creatures from hell in the rhythm-based action adventure game.

Metal: Hellsinger combines the atmosphere of hell reminiscent of DOOM with rhythm-based mechanics. You move and attack according to the rhythm of the song in the game. Your score rises due to various factors that make your combo meter rise. You can also get new weapons with the spirits you collect, similar to the red orbs in Devil May Cry.

Metal: You will add hell to each other with music in Hellsinger

Metal: In Hellsinger, you will fight fearlessly in the toughest lands of hell as a half-man, half-demon, and revenge obsessed character, and prepare for an epic encounter with the Red Judge and destroy the demon armies and leaders. The more you follow the rhythm, the more striking the music will be, the more destruction you will bring to your enemies.

The sinister lands you will bring destruction are a combination of thousands of hell and will take you to the most relentless corners of hell, from the icy world of Voke to the metallic atmosphere of Stygia. After finishing the story, you will be able to conquer the leaderboards or challenge your friends in Challenge Mode.

David Goldfarb, who served as director on Payday 2 and as chief designer in plays such as Battlefield 3 and Battlefield: Bad Company 2, is among the prominent names of the project. In addition, the music of the game was created with metal stars such as Matt Heafy (Trivium), Mikael Stanne (Dark Tranquility), Björn Strid (Soilwork), and Alissa White-Gluz (Arch Enemy).

Metal: Hellsinger will come to next-generation consoles alongside PS4, Xbox One and PC next year. With the first trailer of the game, you can take a closer look at the weapons, mechanics and rhythm of metal music.