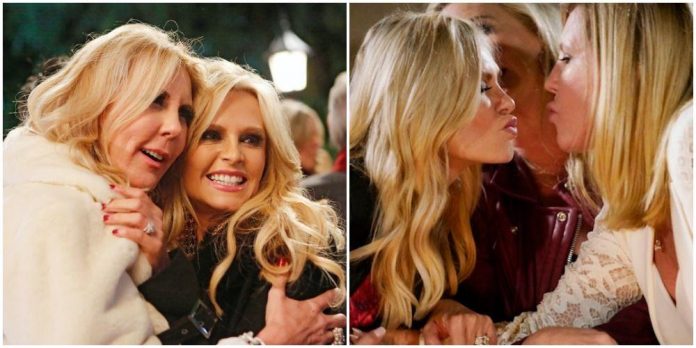 The star of the upcoming season 2 of “The Real Housewives of Ultimate Girls Trip” Tamra Judge has announced that she will meet the boyfriend of her co-star Vicki Gunvalson at the season premiere. Tamra and Vicki previously starred in The Real Housewives of Orange County until they were both fired from the show after season 14. Both Tamra and Vicky did not take the dismissal very well, especially after they had been housewives for so many years. Vicky said she was “deeply hurt,” and Tamra admitted that she was depressed for a while after that.

During her time at RHOC, Vicki went through a lot of grief. Fans witnessed the dissolution of her second marriage to Don Gunvalson, despite numerous attempts to make everything work. Her subsequent relationship with Brooks Ayers alarmed many members of her family and close friends, including Tamra. Vicki insisted that Brooks was her soul mate until she found out he was lying about cancer. Her next relationship with Steve Lodge looked promising. But after five years of living together, the former detective broke off the engagement while Vicky was filming in RHUGT.

Vicky has finally found someone to fill her love tank with her new boyfriend. In March, Vicky shared a photo of the two kissing in her Instagram stories and said that she has a really good relationship with her boyfriend, who is a very “personal person.” Tamra, who has been a close friend of Vicky since RHOC, recently shared with E! The news that she hasn’t met her friend’s new man. She stated, “He goes back and forth from Texas to Orange County. I’ll meet him, he’ll go to the premiere of Ultimate Girls Trip.”

Tamra continued, “He sounds really cute, but today I told Vicky, ‘I need a blood sample to send him to the lab to make sure he’s recovered.’ The RHUGT star joked that she was going to take his driver’s license number to conduct a full background check because of Vicky’s track record. Tamra shared that Vicky became “much happier” after the breakup with Steve, although it took her some time to forget him. She had a hunch that Steve didn’t treat Vicky very well, but she kept her thoughts to herself after her interference in Brooks’ affairs caused a rift in their friendship.

It was reported that Vicky was in a bad way before filming the movie “The Real Housewife: A Trip for Girls” due to her breakup with Steve. A lot of fans are supporting Vicky to find love, and hopefully she did it with her new boyfriend. Although there are no details about him yet, Vicky recently shared on Instagram that she is happy that her family has finally met Michael. It seems that Vicky is trying to hide her relationship with this mysterious man, and hopefully Tamra will approve of Vicky’s new relationship.