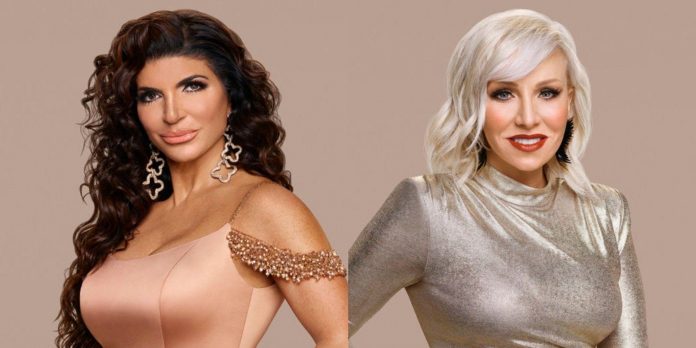 Margaret Josephs said that she was invited to the wedding of Teresa Giudice, despite all their quarrels in The Real Housewives of New Jersey. Margaret and Theresa have been anything but friends over the years. The two have been feuding for season 12 over Margaret’s investigation of Luis Ruelas’ past. Theresa unleashed her fury on Margaret and everyone who tried to burst her “love bubble”.

Margaret became a target of Teresa after questioning Louis about the accusations of several of his exes against a businessman from New Jersey. Louis didn’t mind answering the group’s questions, as he understood that it had to do with dating the housewife OG. Since Luis was the first man Teresa dated after her divorce from Joe Giudice, all attention is focused on their relationship and whether something will work. Teresa was preparing for her big day, which, according to rumors, will be presented in the wedding edition. Some dramas involved those who would attend and serve as bridesmaids at the wedding.

Related: Why “The Real Housewives of New Jersey” Is a Show That Needs a Facelift

Fans didn’t expect Teresa to invite any of her enemies on and off the show. Considering how much she had quarreled with Margaret and Jackie Goldschneider, these two were the last housewives expected to see. But Margaret recently spoke about the invitation she received to the wedding of Teresa and Luis, despite the “turbulent” time they went through in the 12th season of RHONJ. “I was invited to the wedding, so things are definitely better,” Margaret said on SiriusXM Radio Andy. She noted how “funny” it was to get an invitation, given their dirty feud last year. But before the quarrel, Margaret said that she and Theresa were good friends. “We’ve worked something out,” Margaret said of the renewed friendship between her and Theresa.

Margaret confirmed that she, her husband Joe Josephs and Margaret Sr. had received invitations to the wedding. Theresa and Margaret were even seen laughing together during the filming of the 13th season of RHONJ in Dublin. This is a big step for Teresa after she let Margaret get it at the Season 12 reunion. But Margaret said she only “wanted the best for herself,” and added that Theresa “didn’t understand it at first.” Teresa was upset that Margaret questioned Louis about the claims of his exes, who accused him of violence and sexual addiction. Teresa was even more furious when Margaret forced Jennifer Aydin to confess to Bill Aydin’s past affair.

Because Teresa and Jen were very close, she didn’t appreciate how Margaret had jeopardized her friend’s business. Meanwhile, Margaret is very close to Teresa’s sister-in-law, Melissa Gorga, who was upset because she was neglected as a bridesmaid. It was recently revealed that Dolores Catania and Jennifer were added as bridesmaids after Dina Cantin dropped out. But nothing is known about whether Melissa will appear as a bridesmaid. Most likely, she will be one of the seated guests who will watch with Margaret. The drama surrounding Teresa’s wedding is likely to be considered in The Real Housewives of New Jersey.