Home Entertainment Review of the second season of “Only Murders in the Building”: still... 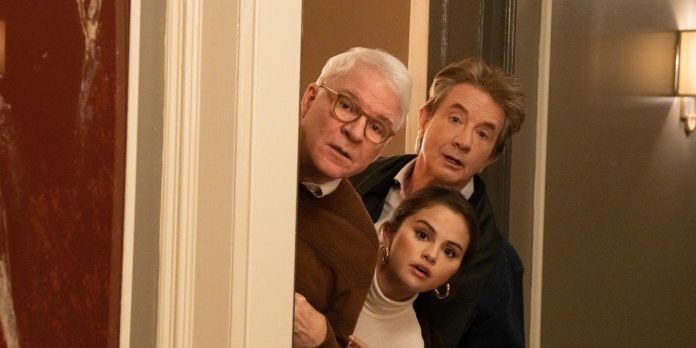 As one of the biggest breakout shows of 2021, Hulu’s Only Murders in the Building has some big shoes to fill going into season 2. From its hilarious approach to murder mysteries to its unique lead trio, the whodunnit was a standout for several reasons in its freshman run. Those reasons are still firmly in place for Only Murders in the Building season 2, though the new episodes (8 out of 10 of which were provided for review) are not without their growing pains. Still, those who enjoyed watching three unexpected friends investigating a murder around their spacious Upper West Side apartment building will likely still have a grand time watching what they get up to in season 2. Only Murders in the Building returns with much of what made season 1 so fun, yet also runs the risk of taking too much on for season 2.

Wasting no time, Only Murders in the Building season 2 picks up right where season 1 left off. Arconia Board President Bunny Folger (Jayne Houdyshell) has been murdered, and all signs point to Mabel Mora (Selena Gomez) being the guilty party, particularly because she was found bloodied with Bunny’s body. Her friends Charles-Haden Savage (Steve Martin) and Oliver Putnam (Martin Short) are also in the police’s crosshairs, leaving them with no choice but to start up season 2 of their podcast in order to clear their names. As Mabel, Charles, and Oliver start digging into Bunny’s murder, they learn a lot more about the Arconia than they ever expected to, even as they encounter both new and familiar faces along the way.

Related: Who Killed [SPOILER]? Every Only Murders In The Building Season 2 Theory

Martin Short, Steve Martin, and Selena Gomez in Only Murders in the Building season 2

Only Murders in the Building season 2 gets off to a strong start. It doesn’t take long to bring the central trio back together, and there’s an early focus on Bunny that successfully adds more depth to a character who was largely unlikeable in season 1. Humanizing Bunny makes it easier to get invested in the search for her murderer, and it gives the mystery an emotional edge. At the same time, Only Murders in the Building has a lot more on its mind during season 2. There are a slew of new characters swiftly introduced, from Cara Delevingne’s posh artist Alice to Shirley MacLaine’s perceptive Leonora Folger, Bunny’s mother. Plus, several memorable faces from Only Murders in the Building season 1 return, making for one very crowded ensemble. As a result, the Bunny investigation sometimes takes a backseat, which can be frustrating for those looking for a bit more urgency.

However, it is a relief to say that all these characters don’t take away any screen time from the core trio, instead flitting in and out around them. Only Murders in the Building season 2 is determined to dig into the meat of each podcaster, whether it be by revealing new details about Mabel’s family to watching Oliver face an unexpected obstacle in his relationship with his son. Not unlike the ensemble, Only Murders in the Building is stuffed with plot threads, but not all of them are successful or add much to the overall story. For example, Amy Schumer guest stars as an exaggerated version of herself and seems to forge a working partnership with Oliver that doesn’t last beyond a handful of episodes. However, there are some gems to be found in season 2, particularly when it comes to a returning plot point involving Charles’ past.

Martin Short, Selena Gomez, and Steve Martin in Only Murders in the Building season 2

It also helps that Only Murders in the Building hasn’t missed a step when it comes to its leads. Martin, Short, and Gomez all return with an eagerness that’s refreshing to see; as soon as they fall back in with each other, the excitement is back. It might be ridiculous to single out an MVP in the group, but Short deserves special credit for his ability to shift between Oliver’s over-the-top mannerisms and his surprising vulnerability. Gomez maintains Mabel’s dry wit and shines in moments where the character begins to question her own nature. Finally, Martin often feels like the glue that brings everyone together because of how steady Charles is, though naturally, he too gets to keep the laughs coming while still poking at his character’s inner workings. Even if the plot might slow, the dynamics between Only Murders in the Building’s trio keep the series feeling just as delightful as it was in season 1.

As this review can only speak to 8 episodes, it remains to be seen if Only Murders in the Building season 2 will stick the landing. The final two installments of the season do have much to wrap up, including subplots that feel somewhat forgotten as of the end of episode 8. However, as the show was so smart in season 1, it’s easy to give it the benefit of the doubt. Only Murders in the Building still retains its charms, and to be sure, there are many things working in its favor in season 2. One just has to hope that in its desire to go much bigger this time around, it hasn’t lost sight of the thing that brought Mabel, Charles, and Oliver together: A good old-fashioned murder mystery.