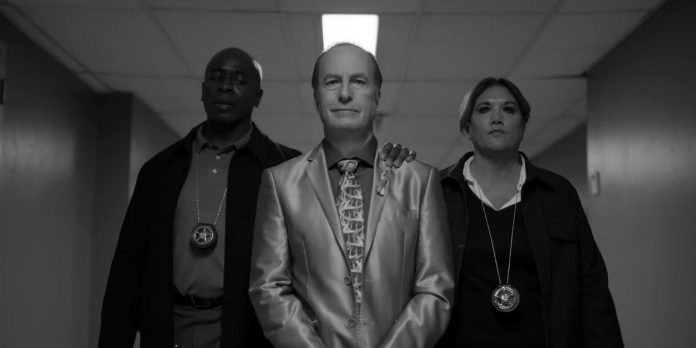 All good things must come to an end and Better Call Saul is no exception to that rule with a final episode that lacks the shock and awe Breaking Bad and this series’ season-enders often had, but one that instead wraps up the life story of Jimmy McGill in perfect fashion.

Not a single gunshot is fired in Better Call Saul’s ending, instead, the showrunners leave audiences with a different kind of bang as Jimmy drops one truth bomb after the other once he’s caught by the police. “Saul Gone”, penned and directed by Peter Gould, is a fantastic closing chapter for the show as Bob Odenkirk delivers a performance that always remains true to character, even featuring a few blasts from the past to usher in Saul’s moment of reckoning.

Regret is the name of the game in Better Call Saul’s finale, and fittingly the episode kicks off with a flashback to season five’s brilliant “Bagman” where Saul and Mike find themselves stuck in the desert, and the former poses the question of what they would change about their lives if given the chance. In Jimmy’s case, these questions come disguised as a time machine hypothetical scenario, but it’s good to see what everyone laments with Mike looking back at the moments he broke bad and the day of his son’s passing.

Things quickly shift gears as the next scene shows Gene make a run for it from Marion’s house almost instantly with the shot tastefully picking up from the very moments where they left off in last week’s “Waterworks” episode. It’s funny to see more of Gene’s apartment, and the countless burner flip phones (that Better Call Saul fans can buy) he has in store, though this time around his police radio broadcast won’t save him as the cops quickly catch on to him.

Funnily enough, the finale pays off a reference from the season opener where a cardboard cutout of Saul is tossed in the dumpster by the authorities seizing his assets, which is exactly where he fumbles for a last-ditch attempt at repairing his vacuum cleaner before being caught. Jimmy has his first breakdown moments when being held in a cell, yet that’s not enough to dissuade him from putting on his final legal show for Better Call Saul fans.

That happens to involve a beloved Breaking Bad character’s return, Marie Schrader, who comes in as a victim interested in Saul’s fate, despite ending up being used by Jimmy to better position himself in the plea negotiation process with his unexpected counsel, former DA Bill Oakley. Again, the ultimate payoff is seeing how Gould and Vince Gilligan piece together all those small references and callbacks that were inserted in previous episodes such as Bill going into private practice, not that Jimmy needs him to cut down his potential sentence from life in jail to only 7 years plus parole.

At least that’s until his final gambit, the murder of Howard Hamlin is cut short with the opposing DA informing that Kim came clean about the case prior to him being caught, which ultimately causes Jimmy to change his strategy. When being escorted back to New Mexico, Jimmy drops a hint that he might have extra info on Kim, however, this moment only hides his manipulation of Bill to at least do the right thing for Kim.

Ms. Wexler happens to be down in Florida experiencing a sudden change of heart and now, seemingly finding herself wanting back in the legal profession, even as a volunteer, perhaps the lasting effect of finally coming clean on what really happened to Howard after so long, thus also giving her proper closure.

Still, many will rejoice that Bryan Cranston’s final scene helps Jimmy get to the finish line as a flashback features Walt and Saul in the lead-up to being granted their new identities. Walt’s regret is the same he manifests in the Breaking Bad finale, he never overcame being ousted from Gray Matter by Elliott and Gretchen; whereas Saul is very much a materialistic conman almost up to the very end like Walt promptly reminds the viewer.

It’s amazing how Saul, or rather Jimmy gets ready for his final performance before coming clean to a judge, after assuring himself that Kim would be there, finally revealing his pain and his actual regrets to the world, but especially to the one woman he truly loved. Chuck’s flashback is ideal to reference this moment, as in the end, Saul’s final act as a free man is exactly what his late brother would have wanted, that Jimmy would finally own up to his own wrongdoings to “Let justice be done though the heavens fall.”

Better Call Saul remains one of television’s most beautiful shows to gawk at until the very end, with the closing sequence granting Jimmy one last tiny blip of color before the life that awaits him. The lighted cigarette in Kim’s hands as the two say their goodbyes to one another is a superb scene to wrap up a series that was always about these two, as if to show there’s still some fire buried in all these ashes; and Kim’s new hairdo tells the audience that she was always right to look for redemption as she may just get to do what she loves the most once again. As for Jimmy, well, “Saul Gone” couldn’t have been a better title for a series that arguably surpassed the legacy of Breaking Bad.

Did the boy soldier know that Stormfront was a Nazi in...

All MultiVersus character classes (and what they mean)