Home Entertainment Review of the 8th series of a Pair of Cuckoos – Why... 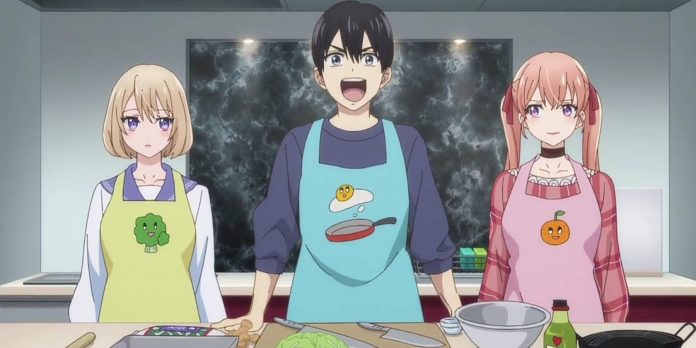 Below are the spoilers for the 8th episode of “Pairs of Cuckoos”: “Are you going to marry him?” now broadcast on Crunchyroll.

Seven episodes, and “A Pair of Cuckoos” successfully guided its audience through a series of unexpected roller coasters. Both in terms of the plot and the overall quality of the episodes. The good and the bad seem to alternate linearly.

Episodes 5 and 6 were arguably the best in this series. The hype was at an all-time high, and everyone was looking forward to the next episode. And then the seventh episode appeared, and the hype was forcibly suppressed to make room for a much more dramatic story. So will Series 8 continue this trend? Let’s find out in this review of the eighth series of “Pairs of Cuckoos”.

Episode 7 is dedicated to a school trip where Nagi gets the opportunity to be in the same group with Hiro and Erica along with his classmate named Shion. Shion tells Erica that he is her biggest fan, so Erica decided to use this chance to let Nagi and Hiro spend some time together.

However, in the end Nagi can’t focus on Hiro at all. His attention was always focused on Erica and Shion and how they seemed to enjoy their time together. Hiro quickly picked up on this sign and made it clear that he didn’t need to spend the day with her if he didn’t want to.

Nagi couldn’t say anything back to her, so they decided to separate and spend some time alone before returning to the group. Nagi accidentally met Erika on the beach and she told him that she was actually looking for someone, but he couldn’t tell him who that person was because it would change his fate forever.

Are you going to marry him?

Episode 7 was quite dramatic, and episode 8 proudly inherited the baton from its predecessor. However, instead of the drama between Erika, Hiro and Nagi, this episode focuses on the relationship between Nagi, Erika and Sachi, the third candidate for the harem.

As the story goes, Sati and her parents are currently living in a tiny apartment because their house is still under renovation. After a quick visit to Nagi and Erica’s house, she decided to move out of her parents’ house and live with Nagi and Erica. Meanwhile, Nagi is dying to find out who Erica mentions in the previous episode.

Erica happily accepts the offer, but Nagi is furious. However, he later finds out that one of the reasons why Sachi wants to live with them is because she wants to spend more time with her brother. It seems to her that Erica will take her brother away from her, and there is nothing she can do about it. That’s why she decided to pluck up the courage and ask them to let her stay in this house.

There are two main issues or conflicts in this episode. The first, which is also the main conflict, concerns Sacha’s move to Naga and Erica’s house. The second is that Nagi wants to know who Erica has been looking for all this time.

Without giving too many spoilers, let’s just say that these conflicts get their own resolution in this episode. But both of them are just painfully unsatisfactory. Almost the entire eighth episode is devoted to escalating tensions, and everything is resolved in about the last five minutes of the episode. Not to mention that the solution is basically simple: “Well, that’s what it is, right?” A good production, but terrible climaxes.

Why are you so serious?

What sets Episode 6 apart from the rest is its brilliant ability to balance the comedy while at the same time developing the characters and moving the story forward. After all, humor is always a big part of what makes “A Couple of Cuckoos” so attractive.

Unfortunately, in series 7, they decided to take a more dramatic approach, and the same thing happens in this series. Sure, the story gets more complicated, but the lack of humor leaves a huge gaping hole that can’t be fixed by simply adding more drama to the mix. Comedy is part of the identity of The Cuckoo Couple, so hopefully we’ll see it return in the next episode.

This is the episode “Good” for “A Pair of Cuckoos”. Again, it’s not so bad, but it’s not good either. It feels like the series is trying to be more serious and presents more conflict in order to make the reader sympathize with the characters and relate to their problems.

At the same time, they upset the balance between conflict and resolution, humor and drama. The tension of the conflict has a long build-up, but the resolution is lightning fast. Drama can make you cry, but there is practically no trace of humor left. Let’s hope that in the next part there will be a more balanced series.

Why did not it happen?! Twisted Metal star could be a...