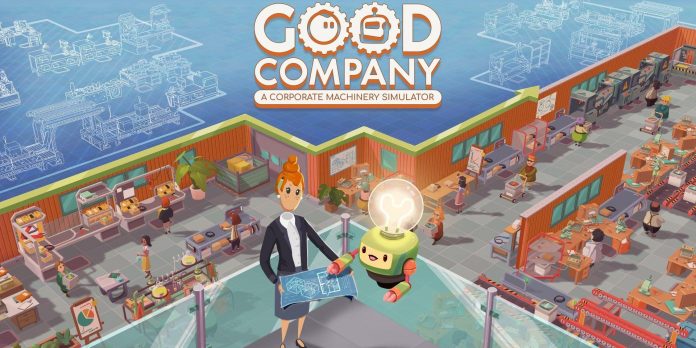 Management simulator Good Company puts a mechanical emphasis on the genre to create a game about efficiency, planning, and technological innovations. Made by developer Chasing Carrots, Good Company sees players working to build increasingly complex technology as they strive to make a profit and keep up with market trends. The game nails the satisfying feeling of production loops and contains lots of tools for those who love to micromanage in their simulation games; however, for some, Good Company may feel too daunting and sterile to be enjoyable.

Good Company offers a single player campaign, a freeplay mode, and multiplayer capabilities. The campaign sees players taking over the production grounds of Charlie’s Circuits – your father’s old company – in an effort to create a successful new technology startup that will revitalize the county’s economy. The first four levels of the game are tutorials, showing off the extensive management options the game has to offer right out of the gate. Each level comes with its own milestones that must be achieved, such as producing a certain amount of units per week, as players work towards the three possible trophies available for each one in a manner similar to that of management games like Two Point Hospital.

In order to build their tech empire, players must constantly develop and sell new technology. One of Good Company’s most interesting mechanics is its blueprint building system and how it interacts with its market monitoring. Players will begin selling in the market of simple technologies like calculators, and will need to release new and improved versions of their products as trends change. For example, when it comes to calculators, players can improve things like screen size and battery power with each model. As units sell, players earn Discovery Points, which will allow them to unlock new markets. This means that over time, players will progress from dealing with the calculator market to more complex technologies like computers and 3D printers.

Of course, like any comprehensive tycoon-style game, players must take public desires and expectations into account when designing their products in Good Company. If a blueprint is outdated or inefficient, the device’s market value will be too low to generate a profit. However, players cannot simply design the most high-tech devices each generation, as they must also balance the cost of its parts and the length of time it takes to produce. Although it has no effect on how the product sells, players can also control the naming and aesthetics of the technology they produce, which adds a nice personal touch to the process.

The crafting of technology in Good Company consists of several steps before reaching a finished product. First there are materials, which will arrive on courier pallets after a buy order is set for them. These materials are used to craft components, which will in turn be used to make modules, which will be used in the final product, creating a crafting loop that is both satisfying and tedious simultaneously. For example, to make a cassette player, players will need to order metal and plastic in order to make coils, which will be used in a monophone speaker module alongside another component and material, until finally the monophone speaker combines with the player’s case, battery, and display modules – which each require their own components – to make a finished product.

As players progress in Good Company, their corporation can conduct research that will help improve the modules utilized in production, therefore raising the overall value of the products. Research categories like Audiovisual, Motion, and Power Supply can all be explored, with simple technologies like brightness sensors and small DC motors becoming high resolution cameras and high speed motors. Similarly, players can also improve their business through skill tree-style gains called business development. Here, players can unlock a combination of new tools, like specified crafting tables and machines, as well as general improvements like increased machine speed and improved employee product handling.

Related: Games That Let You Run Your Own Cult

One of the things that holds Good Company back is its lack of interactions with the public. In most management titles, players will see public reactions to their work in one way or another, whether it be guests at a zoo or customers patronizing a business. In Good Company players only see results through profits and market interests, which, while informative, eliminates the joy behind seeing the public react to a player’s creation. Although it’s not necessarily surprising that a management simulator based around factory work lacks this feature, it’s one many tycoon game fans are familiar with and look forward to.

Further to that end, Good Company is a title that strongly distances itself from the more human aspects of employee management, focusing almost solely on efficiency. While things like the creation of work routes and improving employee skills are more core aspects of gameplay, players have little control over who they hire in the first place, and have a lack of real incentive to keep employees happy or make the factory floor a pleasing place to be – unlike most other management simulators. Happy employees do get small perks like working slightly faster and contributing a modicum amount to the accumulation of Success Points, but there are no consequences for an unhappy staff, and while a perhaps apt description of capitalism, much of the employee management aspects typically found in this genre are lost all the same.

Good Company is described as a game “inspired by the trail-blazing spirit of Silicon Valley,” an essence that it manages to successfully capture in the way players advance and adapt in an ever-changing technological landscape. However, alongside this comes the sterility of its assembly line-focused mechanics and a depth of work required that may be intimidating to those not incredibly familiar with the management simulation genre. For experienced players who value creating efficient task loops and the utmost optimization, Good Company provides a slew of tools that let players micromanage to their heart’s content, but it may lack the human touch some players are looking for.