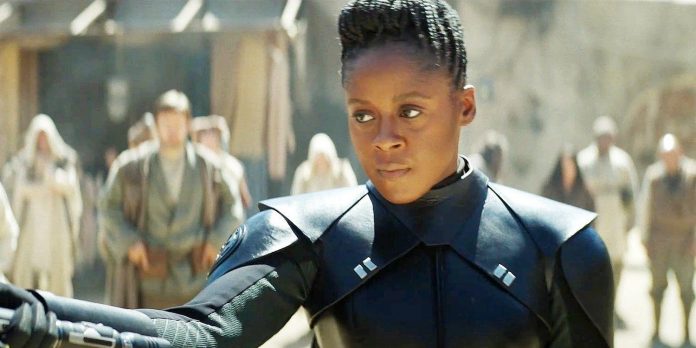 In Obi-Wan Kenobi’s original script, Riva dies at the end by the hand of Darth Vader. Ewan McGregor’s return to Star Wars was accompanied by many new revelations about the established canon of the franchise. The Disney+ series not only shows two rematch matches between Obi-Wan Kenobi and Darth Vader, but also shows how Kenobi helps save young Leia Organa and face the Inquisitors. The latter are deadly Jedi hunters under the command of Vader, and Obi—Wan Kenobi introduced a new Inquisitor into the canon through the Third Sister Reva, played by Moses Ingram.

Reva’s role in Obi-Wan Kenobi was significant, as she was the mastermind behind Leia’s abduction to lure Kenobi out of hiding. Viewers watched as she hunted legendary Jedi, trying to prove herself to Darth Vader, whom she secretly hated since she was a young Jedi during Order 66. However, at the beginning of the series, many expected Riva to die in Obi-Wan Kenobi ever since. she is not mentioned in any other canonical materials that appeared after these events. Despite the fact that Darth Vader stabbed her in the fifth episode, Reva survived and survived even the finale.

It has now been confirmed that Reva’s death was originally supposed to happen in Obi-Wan Kenobi. Screenwriter Stuart Beatty, who initially worked on the continuation of the story of Obi-Wan in the form of a film trilogy, recently spoke with The Direct and told how his plans for the character of Inquisitor Moses Ingram differed. He mentioned that he created Reva when he was writing the Obi-Wan Kenobi movie script, and that Darth Vader originally killed Reva with his lightsaber. Beatty says that Reeva’s death should have come after she saved the Jedi after claiming to have killed Obi-Wan, ending Vader’s pursuit of her former teacher.

Yes, killed by Vader at the end. Yes, I wanted this story to end. I wanted Reva to play a role in the Kenobi-Vader story, which, in fact, was at the end, it was she who allowed Vader, actually told Vader to stop hunting Kenobi. You know, she ended Vader’s obsession with Kenobi. She claimed that it was over, everything was done. So, that was her role. And she did so many terrible things that I felt she had to die [laughs]. You can only redeem so much.

Lucasfilm may have turned Obi-Wan Kenobi from a potential movie trilogy into a limited series on Disney+, but Beatty’s script was still used as the basis for this adventure. Although many of his ideas were used in the final product, killing Reva was not one of them. It is unknown if Lucasfilm ever intended to include Reeva’s death in Obi-Wan Kenobi’s show. There were rumors that the finale of the show was changed to keep her alive. Despite this, refusing to kill Reeva was just one of the ways the series deviated from what Beatty planned to do. For example, in his version, Obi-Wan told Riva that Darth Vader is Anakin Skywalker, which is the opposite in the series.

The ambiguous fate of Reeva in the finale of Obi-Wan Kenobi is one of the biggest unresolved issues of the show. It seems that it would be wiser for Darth Vader and the Grand Inquisitor to end Reeva’s ruthlessness with death. However, Moses Ingram faced serious harassment after Reva’s debut. Most viewers of Obi-Wan Kenobi liked the character and her arch. Thanks to Lucasfilm’s decision to change Obi-Wan Kenobi’s scripts and not kill Reeva, we have many opportunities to see her again.

Darker Than Black: Heavy-duty noir from the studio behind My Hero