Home Entertainment Return to Monkey Island: how to get a mop 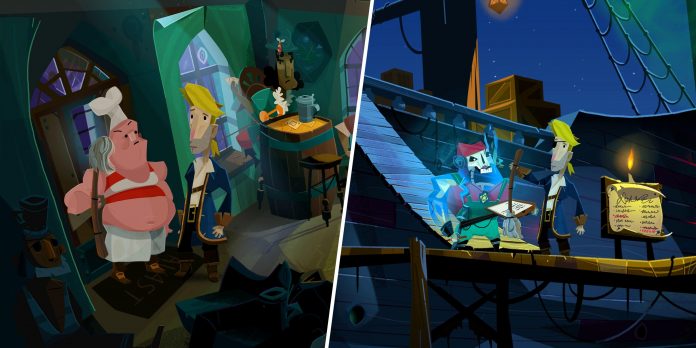 “Return to Monkey Island” begins with Guybrush searching for a ship and crew to finally uncover the mystery of Monkey Island. However, after talking with the new pirate leaders on the island of Meli, it soon becomes clear that this is impossible. As a result, the mighty pirate decides to ride aboard the ship of his sworn enemy LeChak, who is also planning a trip to the main island of the series.

Naturally, the first step to achieving this is to go to LeChak’s ship, where the players of “Return to Monkey Island” will be able to talk to the quartermaster and ask her about the job. It just so happens that the crew does not have enough mops, however, in order to be considered for this position, Guybrush will first need to get his hands on a mop. Naturally, in the true style of Monkey Island, it turns out to be far from easy to do this.

If they haven’t already, players should head to the International Mojo House in the Low Street area and grab a Knife and a Forgiveness Frog from a wooden shelf in front of the Voodoo Lady. While they’re on Low Street, they should also check out the plaque under the statue of Carla, a former swordmaster and now governor of Mile Island. This will show that she fought bravely in Santo Domingo, which will come in handy later.

Once all this is taken care of, players must return to the SCUMM bar down at the docks and go through the door in the far right corner to get to the kitchen. Then they will need to talk to the chef, who will tell Guybrush that he needs to make his own mop from scratch, not just buy it. This means that players will need to find a tree with a mop handle and cut themselves a handle from one of its branches.

However, instead of going blindly into the woods in search of this rare specimen, players should go to Wally’s store on Low Street and ask him to make a map for them. Unfortunately, a long-suffering cartographer needs a sample of wood from a tree with a mop handle to map out its location. Fortunately, the trip wasn’t completely in vain, as players can get themselves a monocle from the box on Wally’s desk while they’re here.

After taking the Monocle, players must return to the SCUMM bar and talk to the chef again to find out that a difficult customer is asking him to cook a dish containing “Ingredients” that he recently ate during a visit to the governor’s mansion. Speaking of the governor, players should study her re-election poster, which can be found attached to the building on the left side of the dock. By doing so, they learn that Carla is committed to the cause.

The players then have to go to the governor’s mansion and talk to Carla upon arrival. Having exhausted all the dialogue options, they can go to the bookshelf to the left of the stairs and study the yellow book called “Ingredients”. They can ask to borrow it, but Carla will show that she is still angry with Guybrush because of the book he borrowed earlier and never returned, and despite his attempts to apologize, she flatly refuses to forgive him.

Fortunately, the players have a Forgiveness Frog, although they will need to personalize it before handing it to Carla if they want her to forgive Guybrush. This can be done by opening the bag and combining the modern Guybrush handle with the forgiveness frog. Players will then be faced with five different options for what to write on the frog’s back, and must choose the following options:

Dear Carla, I’m sorry I lost the book I took. I appreciate your dedication… …as evidenced by your actions in Santo Domingo. I have implemented a reminder system for myself.

It is worth noting here that the third option will not be available if players do not study the poster about Carla’s re-election at the docks, and the fourth option will become available only after players read the plaque under the statue at a Low level. Street. Assuming the players have done both of these things before, they will be able to sign the frog using the aforementioned options and then hand it over to Carla.

Once Carla forgives Guybrish, the players should ask her again if they can borrow the ingredients book. This time she will agree, after which the players must return to the SCUMM bar and give the cookbook to the chef to distract him. While he is busy preparing a mysterious meal for a difficult customer, they can use a knife to cut a wooden slider from the handle of the mop by the door.

Players can also try to steal the chef’s mop by picking it up and trying to leave the SCUMM bar by holding it down. This will lead to a humorous cut scene and unlock the “Mop Heist” achievement for those who play the game on Steam.