Home Entertainment Return to Monkey Island: how to get a flattened skull 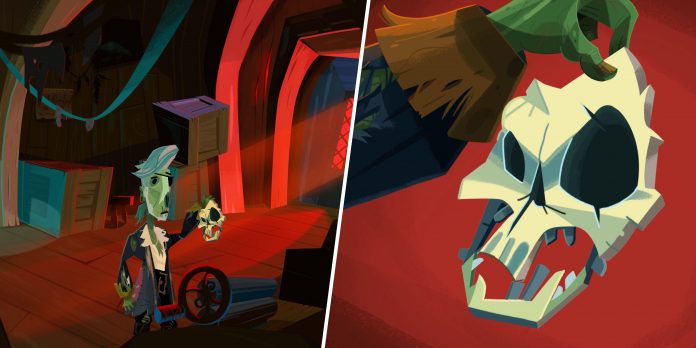 Shortly after escaping from the hold of the ship at the beginning of part 2, the players of “Return to Monkey Island” will be tasked with finding a flattened skull to prepare the “Monkey Island” LeChaka potion. In previous Monkey Island games, players have traditionally used the pirate flag “Jolly Roger” for this purpose, but this time it’s a little different.

For some reason, the ship’s observer Flambe will not allow Guybrush to climb into the crow’s nest, forcing the players to think a little outside the box. Fortunately, they will be able to find everything they need to create their own flattened skull below the deck of the ship, where they will need to get to once they regain control of Guybrush.

How to Get a Flattened Skull in Return to Monkey Island

Those who carefully examined the hold before escaping know that a skull happened to be inside. Going down the stairs and to the left will cause Gullet to throw Guybrush back into the hold, where players will be given the opportunity to either convince Murray to go with them using words, or simply pick him up and carry him away against his will. If the players didn’t get it out of the box earlier, they will need to do it now before making their choice.

Once Murray is in the Guybrush bag, players must return through the porthole and climb to the main deck of the ship. Then they will want to go down the stairs again, but this time you should make sure that they do not move too far to the left so that Gullet does not notice them. Instead, they should inspect the washing machine, which is slightly to the right of the stairs, which will cause it to fall apart instantly.

Fortunately, Return to Monkey Island players have a few screws in their inventory, and they can use them and some lube to repair a broken device. Once it’s working again, it’s a simple case of using a Murray with a washing machine to flatten it, and then putting a Very flattened Murray in a cauldron of flaming red potion on the main deck of the ship.

What to do after making the potion

Almost immediately after Guybrush prepares the potion, Gullet will knock over the cauldron and demand that Guybrush clean it. However, Lechak is not too kind to this, since the ghost captain decided to throw his former First Tampon overboard and offer Guybrush a promotion. Players will then be able to climb up to the crow’s nest and interact with the telescope to find out that Captain Madison and other pirate leaders are following LeChuck’s ship.

After a moment, it becomes clear that Madison and her team are brewing their own “Monkey Island” potion, even though they don’t have the flattened skull needed for the potion to work. Guybrush then comes up with a plan to give them Murray and then follow them to Monkey Island once they finish their potion, but LeChuck’s team votes against his plan. As often happens, Guybrush has to change his mind about returning to Monkey Island.

Spider-Man 2 should draw inspiration from one key feature of GTA...