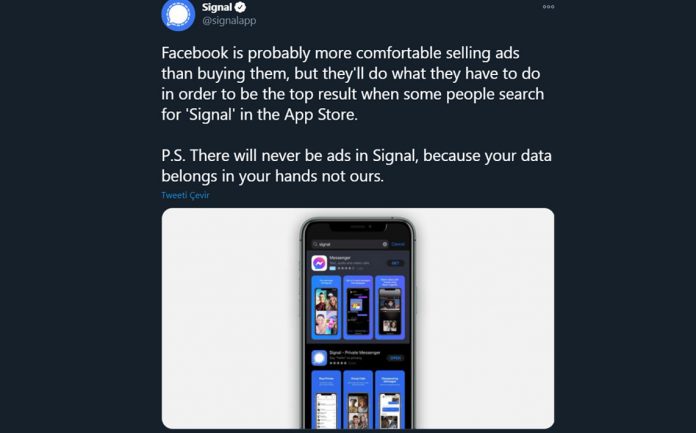 Signal, which became popular suddenly after WhatsApp’s new privacy agreement, reacted to Facebook’s advertisement in the App Store. Signal dropped a small note to his statement following the ad response.

Recently, when WhatsApp users entered the application in the morning, a window appeared. This screen was the window containing WhatsApp’s new privacy agreement. While many users approve the new agreement without reading it, users who learned the content of the agreement started to leave WhatsApp.

With the new privacy agreement, WhatsApp allowed us to consent to submit a lot of information about us to all Facebook companies. When this situation had a worldwide repercussion, and especially in our country, alternative applications dethroned WhatsApp in application stores. One of these alternative apps was Signal.

Signal, an open source messaging application, gained popularity both in our country and in the world. Today, a post was made on Signal’s official Twitter account. Signal made an important statement by reacting to Facebook’s advertising move in this post. Signal’s statement was as follows:

“Facebook probably seems comfortable selling ads rather than buying them, but when people search for ‘Signal’ on the App Store, they will do what they need to do to be the best result.
Note: There will never be any ads on Signal because your data is in your hands, not ours. ”

As can be seen in the image shared by Signal in his Tweet, Facebook has put the advertisement of the Messenger application in the results of the ‘Signal’ search in the App Store. Thus, when users search for the ‘Signal’ application, they are faced with Facebook’s application, not the actual application.

You can find more information about Signal, the messaging app that gained hundreds of thousands of new users following WhatsApp’s new privacy agreement, in this article. Also, if you do not want to use WhatsApp, you can see other alternative applications you can use by clicking this link.