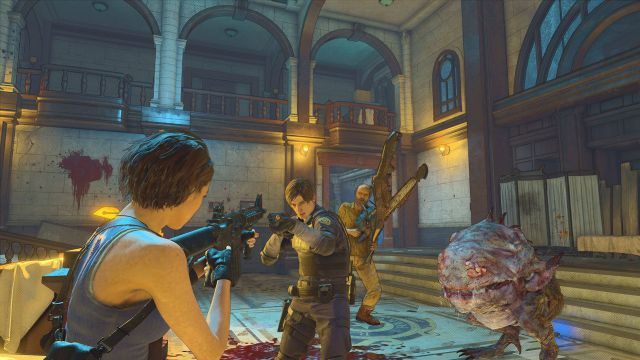 This multiplayer mode will be included in Resident Evil Village, the new main installment of the Capcom saga.

The presentation of Resident Evil Re: Verse did not leave anyone indifferent. Its visual style, which mixes the realistic aspect with comic visual elements, is fused with an online multiplayer proposal in which we can handle the most iconic characters of the saga. It will be a fight to the death, since only one can remain standing. This experience, available for free to all those who acquire Resident Evil Village, the eighth installment of the series, has just been shown in 90 minutes of gameplay, which you can see below these lines.

This 6 against 6 game, which has already launched the beta for members of the Resident Evil Ambassador program, is a PvP that invites us to collect samples of the virus. Depending on the number of samples we acquire, we will become one monster or another, but Tyrant is the most powerful. On the other hand, the comic filter that we referred to earlier can be deactivated in the options menu. Leon, Chris, Jill and company must face a new threat. It remains to be seen which of them manages to survive.

Resident Evil Re: Verse does not have a confirmed release date yet. The game was presented during a streaming in which some of the novelties of the saga, which turns 25, were anticipated. What we do know is that Resident Evil Village will go on sale on May 7. Although it was initially announced for PS5, Xbox Series X and Xbox Series S, the Japanese have decided to launch the product also on the previous generation of consoles, so that PS4 and Xbox Onte players will also be able to experience this new main installment.

Ethan Winters, protagonist of Resident Evil 7: Biohazard, will once again be the main character of the game. On this occasion, dragged by Chris Redfield, he will enter a mysterious town ruled by the witch Lady Dimitrescu, a strange character who makes his first appearance in the demo, available for PS5 through the PS Store.