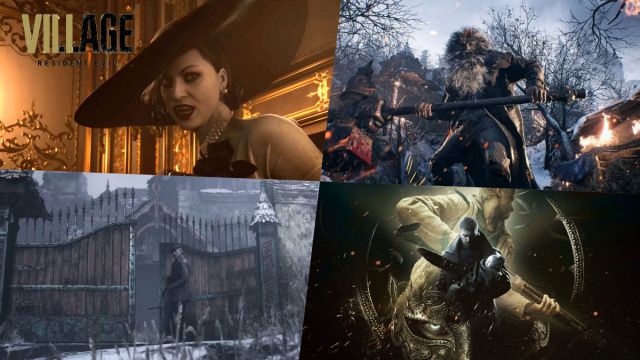 Resident Evil 8 Village: The new main installment of the saga will be the largest, but it will also add multiple novelties at all levels. The wait is about to end. There are just a few weeks to succumb to the nightmare of Resident Evil Village, the long-awaited new installment of Capcom’s survival horror. On April 15, in addition, there will be a Resident Evil Showcase that will advance some of the secrets of the eighth main chapter of the saga. However, the most recent issue of GameInformer magazine has revealed dozens of details beforehand, collected on Twitter by Dusk Golem.

We handle Ethan, the protagonist of the video game, in the first person. To underline the psychological aspect, Capcom will allow players to listen to the character’s thoughts. In fact, the Japanese are aware that they did not fully develop it in Resident Evil 7: Biohazard, so this time they will focus the shot more, which does not mean that other characters are not given importance. For example, with Chris Redfield, one of the classics of the series, they will explore the darker side of him.

One of the enemies that we will meet during our stay in the town are the Lycan, who have been described as the most intelligent of the saga. They are crouched on rooftops and bushes, ready to strike when you don’t know it. They act differently depending on whether they are alone or in a herd and there are also several different species, which use varied movements.

(1/20) Here's a BIG OLE' tweet wall of new Resident Evil Village info from the newest Game Informer issue. I am leaving out a few things to buy it yourself, but I like to summarize these. Includes new screens from the issue.

There's A LOT new here on RE8, so let's get started. pic.twitter.com/z0yoz2cmYd

A town without a name

As for the town, it turns out that it has no name and that the locals themselves call it El Pueblo. There is a historical reason that is revealed at some point in history. The place is not exactly a charm despite its beauty, since it is a village of death, where you can find goats hanging from trees, dead horses, etc. We can hunt animals and use resources in order to obtain certain improvements.

Capcom’s objective with Resident Evil Village is to transfer the knowledge acquired over these 25 years and translate it into a video game that combines classic mechanics, horror and refined playable concepts linked to action. The locations are the most extensive in the series so far, so the developers have taken advantage of it to create deeper game mechanics. In addition, Village has a much more vertical design. There will be moments of action, but also moments in which the best decision will be to use a good defense.

The scenarios are not static. Capcom gives an example of the possibility of shooting against elements of the environment to provoke different reactions, such as being able to temporarily stun enemies. The puzzles, meanwhile, have been designed to be fun, not too easy or too difficult, but above all integrated with the world and the story.

Resident Evil Village will be available on May 7 on PS4, PS5, Xbox One, Xbox Series X, Xbox Series S, Google Stadia and PC.