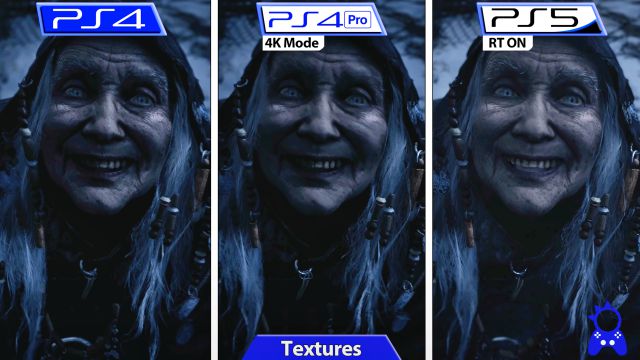 Resident Evil 8 Village: The Capcom game releases its new demo in advance on PlayStation consoles. They check its technical performance on all Sony platforms.The first part of the Resident Evil 8 Village demo debuted this Sunday, April 18, temporarily and in advance. This second playable demo of the long-awaited Capcom title comes full of peculiarities, both due to its timing and its structure, so there was no room for waiting. The Bit Analyst YouTube channel has compared the performance of the demo on PS5, PS4 and PS4 Pro.

As he explains, Ray Tracing can be activated or deactivated on PS5 at the convenience of each user and significantly affects the general lighting, in addition to slightly reducing the stability of the FPS when we opt for ray tracing. For its part, PS4 Pro has two modes: 4K Checkerboard resolution and an average rate of 40 FPS or 1080p at 60 FPS.

On PlayStation 5 it is where we have the best result in anisotropic filtering, while loading times are “incredibly fast” on PS5, says El Analista de Bits, with an average wait of only 2 seconds; on PS3 it’s half a minute to wait. Where there are no great differences is in the textures. Apparently, both generations of consoles have similar textures, although the average resolution is higher on PlayStation 5.

The first part of the demo is the Village Demo; It has allowed us to play 30 minutes starting in the period between Sunday, April 18 from 7:00 p.m. (CEST) and the night of Monday, April 19 at 3:00 AM (CEST). It has only been possible to play during those eight hours. This weekend the Castle Demo will be activated on PS4 and PS5. It will be active for eight hours from Sunday, April 25 at 7:00 p.m. (CEST) to 3:00 a.m. on Monday, April 26. In the same way, it will allow you to play only 30 minutes, giving a total of one hour.

The multiplatform availability (for everyone) of the Resident Evil 8 Village demo will be from May 2 at 02:00 (CEST, Spanish peninsular time) for 24 hours; until next May 3 at 03:00 (CEST). It will include Village and Castle, with the difference that we can choose how much time to dedicate to each part with a maximum accumulated total of 60 minutes.

For those interested, Capcom has confirmed the resolution, FPS rate and configurations with and without Ray-Tracing for Resident Evil Village in its full version. This is how the game will work on PlayStation consoles in its final version with all the available options:

Other notable announcements from the Resident Evil Showcase have been a Mercenaries mode and Resident Evil 4 VR for Oculust Quest 2, as well as a spectacular new three-minute trailer focusing on the figure of Ethan Winters.

Resident Evil 8 Village will hit stores around the world this coming May 7 for PS4, PS5, Xbox One, Xbox Series X | S, Stadia and PC.