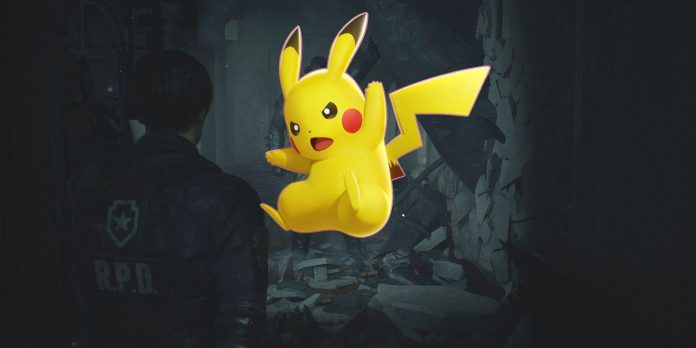 As with the 2020 Resident Evil 3 remake, Resident Evil 2 has received a lot of mods from fans. This includes finding ways to enhance the horror of the main game or add a little humor to the dark events. Some of these RE 2 modifications add VR support and a frightening first-person perspective, or instead restore the fixed-camera view from the original game. Others are simple skins that replace the main characters of Resident Evil 2 with Isaac Clark from Dead Space 2 or Regina from Dino Crisis, and also replace the terrifying Mr. X with an equally deadly Nemesis from Resident Evil 3. Even more playful Resident Evil 2 mods have heralded Mr. X’s regular attacks with the song DMX “X Gon’Give It To Ya’ with reference to a popular internet meme.

Now Resident Evil 2 players may find that they are not being hunted by a seven-foot undead monster, but by the always charming Pikachu from the Pokémon franchise. Twitter user and 3D artist Marcos RC recently shared a brief gameplay video of the Resident Evil 2 mod, which is available on their Patreon. He places a cute electric rodent on the dark streets of Raccoon City, as shown when Leon meets a wild Pikachu in a destroyed house. The electric mouse mascot from the Pokémon franchise slowly approaches the hapless policeman with an ironic smile on his face before attacking Leon with surprisingly slow blows. All this time, Pikachu emphasizes each attack with a cute exclamation of “Peak! Pica!” is of little comfort to Leon as he slowly tries to avoid a pleasant attack.

There will be many more Resident Evil action games in the next few years, as Capcom recently announced that its RE remake series will continue with the fan-favorite Resident Evil 4, which was announced during the PlayStation State Of Play demo this month and demonstrated. more details in the live broadcast of the Capcom Showcase last week. Leon S. Kennedy will return with a much darker persona in Resident Evil 4 Remake as he attempts to rescue the president’s daughter Ashley Graham from a sinister cult in rural Spain. Recent gameplay footage has hinted that popular characters such as Ada Wong may also appear.

Pokemon Pikachu is one of the last characters that players expect to see in the Resident Evil game, and a cute little glowing mouse usually doesn’t scare. However, seeing the fan-favorite Nintendo mascot emerge from the shady ruins of Raccoon City to terrorize Leon in Resident Evil 2 is a surreal and humorous experience for fans of both series.