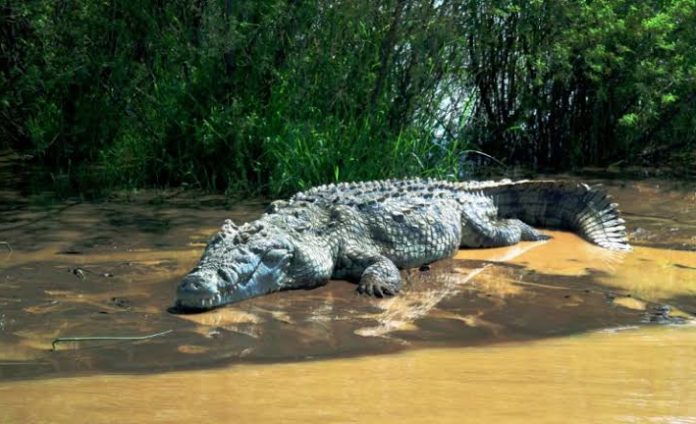 In India, where the crocodile population is abundant, a gigantic crocodile entered the gardens of the peasants. The massive reptile that created great panic in the villagers was left to its natural environment after 4 hours of rescue operation.

The peasants living in Gujarat, West India, have experienced fearful and tense moments. What made the villagers so frightened was that a mammoth-sized crocodile had entered fields and gardens.

The 3.6-meter-long crocodile was rescued from the village of Vadodara, about 145 km from Gandhinagar, the state capital. This gigantic reptile was rescued by wildlife volunteers and then left to land owned by the Ministry of Forestry.

#WATCH Gujarat: A 12-feet-long crocodile which had ventured out into fields in Raval village of Vadodara, yesterday, was rescued and handed over to forest department. pic.twitter.com/TOiVuqjXFv

Panic-stricken locals suspect that this giant crocodile may have come out of the Vishwamitri River, which is home to some 500 crocodiles near the village. A huge crocodile was rescued from the same city earlier this week.

In some villages in Gujarat, the western province of India, villagers and crocodiles live side by side. There are evaluations that this situation is very dangerous. Because of this common event, the fear of crocodile began in the indigenous people of Vadodara.

These gigantic creatures can be very dangerous to humans when they feel at the time of the attack. Earlier this year, a 4.5-meter-long crocodile, which had been unauthorized feeding on a pearl farm, had tore off the arm of the laboratory director of the farm that fell into the pond and tore his belly.