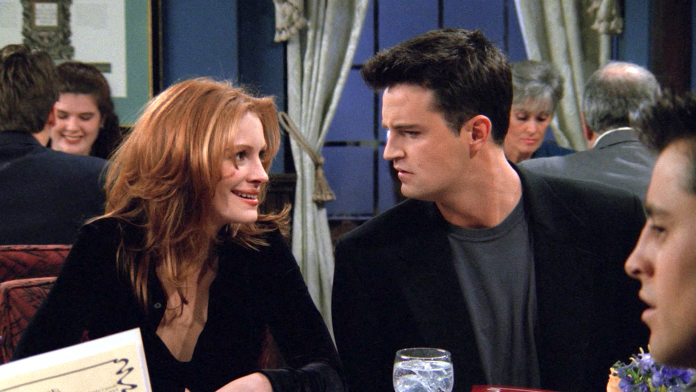 Friends has a long list of famous guest stars, from Brad Pitt to Billy Crystal. And it’s not surprising considering how popular the series has become.

But even with a huge following and ratings to match, not all Hollywood actors were clamoring to be on Friends.

The creators of Friends knew that it had to include some special elements to attract the attention of a new audience. In his world, that meant amazing famous guest stars. And who was more famous in the mid-90s than Julia Roberts?

The episode in question includes Rachel (Jennifer Aniston) and Monica (Courteney Cox) fighting for a chance to date Jean-Claude Van Damme, Joey (Matt LeBlanc) falling in love with an obsessed fan (played by Brooke Shields) and Chandler (Matthew Perry) reconnecting with a former classmate (Julia Roberts) who secretly hates him.

Julia Roberts had a busy schedule and didn’t need to appear in a sitcom. But she was willing to join Friends as a guest star for her special episode under a very strange and specific condition. Showrunner Marta Kauffman, during the interview, provided some details.

“Getting Julia Roberts was incredibly exciting. We knew she would have the right touch for it. And when she said yes, it was pretty amazing. ”

“Do you know the story of how we got it? Matthew (Perry) asked her to be on the show and she replied, ‘Write me an article on quantum physics and I’ll do it. I understand Matthew left, wrote an article, and faxed it to him the next day. ”

Quantum physics probably wasn’t the easiest thing to write about, but Matthew Perry’s efforts paid off both on screen and afterward. The two actors experienced some chemistry in real life and eventually dated for about a year after meeting on Friends. Maybe the article wasn’t just talking about physics after all.