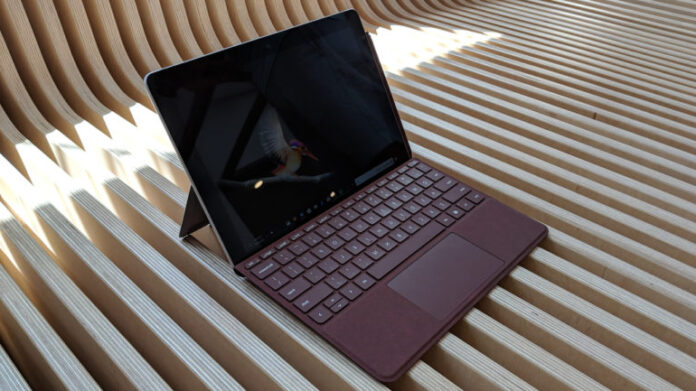 Microsoft’s portable computer, Surface Go 2, which has come up with different news in the past days, is now on the agenda with its rendered images. Images that are not known to be true show us some details of the next generation Surface Go.

The new version of Microsoft’s tablet computer, Surface Go, will be revealed with its recently renewed design and reinforced hardware. Render images of the new generation device, which have been seen in different places, including FCC listing, have been shared recently.

Assuming the images are real, the next generation Surface Go will be presented with a 10.5-inch screen with narrower frames compared to its predecessor. In addition to the screen that looks more elegant in terms of design, the keyboard is said to come with 4 different color options: Red, Platinum, Ice Blue and Black.

What will Microsoft Surface Go 2 offer?
When we come to the hardware part, WinFuture, which is the address of leaks, says that the mobile computer will be powered by either Intel Core m3-8100Y or Intel Pentium Gold 4425Y processors. In addition to the processor, the site claims that up to 8 GB of RAM support will be included in Surface Go 2, and the storage section claims that internal storage of up to 256 GB will be among the options.

When we look at the render images, we can say that there is no noticeable change between the first generation Surface Go and the new generation in terms of design. The only exception at this point is slightly narrower bezels and the redesigned 10.5-inch screen, as we mentioned above.

What will be the price of Microsoft Surface Go 2?
According to claims, Surface Go 2, which has 4 GB of RAM, will be sold in big technology stores and Microsoft Store with a price tag of $ 498. On the other hand, the price of the high-end version with 128 GB storage is expected to be $ 682.

Before we conclude our article, let us remind you that this information is not certain, and real hardware features and price information will only be determined when the device is introduced. We will be informing you when Microsoft’s new Surface Go 2 computer is introduced. Stay informed to be aware of all the developments.