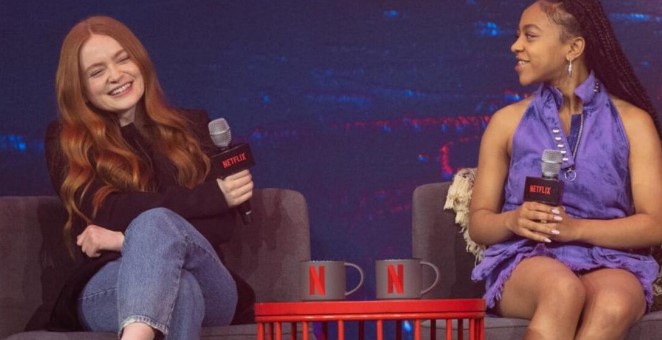 After a four-year hiatus, “Stranger Things” made a grand comeback with a massive 4th season in 2022. In terms of scale, production value and storyline, everything in the last season was a little better than the previous ones. With the release of the second part of the fourth season, the cast was on top of a flawless preliminary and final finale. That’s when Sadie Sink (Max Mayfield) and Priah Ferguson blow off steam.

These two participated in the classic charade game, but with a change. They had to act out and guess the characters of “Stranger Things“. Let’s see how well they performed.

Not only are Sadie Sink and Priah Ferguson absolutely gorgeous, they’re also brutal actors. If their performances in “Stranger Things” did not make this obvious, then their acting skills in charades will surely convince you of the same. The game also demonstrated how well the two actresses knew their colleagues in the film, by how easily they could imitate their manners.

Starting with a lung, Ferguson made a finger gun and took a pose. It took only half a second for Sink to guess Jim Hopper. When it came to Sadie’s turn, she put her hands on her waist and sighed irritably. She whispered,

“I think he always likes to stand like this.”

Pria immediately asked if the man was Steve, and he was. The clip is even interspersed with real footage of Steve performing the same actions. After that, the real Erica played out quick and overly exaggerated moments, imitating someone telling something important. And just like that, Sink instantly replied: “Dustin!”

The next few actions and guesses were so swift that if charades were a sport, these girls would definitely bring home gold. Sadie even played an imaginary guitar and made a typical “Horns up” symbol out of her fingers. No wonder Ferguson guessed our favorite metalhead Eddie in two seconds. Watch the full video to see how many other characters the duo managed to imitate.

yutu3 How many did you guess? Let us know in the comments. Although the fifth season is still a long way off, you can always review the first four seasons of “Stranger Things” on Netflix.