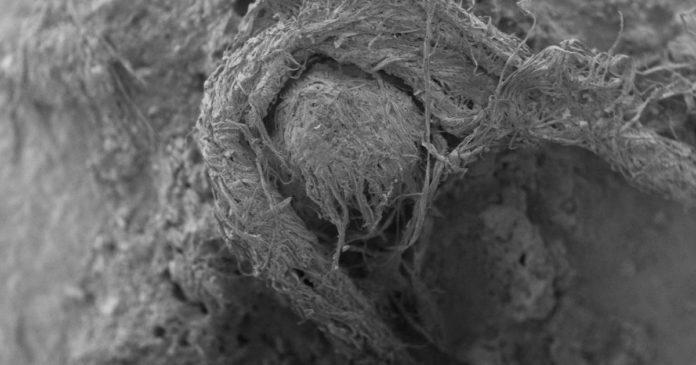 Researchers in the south of France have discovered the remnants of string (thin string made of linen) used by Neanderthals who lived more than 41 thousand years ago. This is considered to be the oldest evidence of fiber technology that appeared in archaeological records.

Continuing their research in the south of France, scientists made an exciting discovery. Archaeologists excavating at Abri du Maras found pieces of string dating from more than 41,000 years old. As is known, twine; A name given to fine threads made from the fibers of plants such as flax, hemp. This new discovery demonstrated the remarkable cognitive skills of extinct neandertals, making it the oldest fiber technology evidence ever found in archaeological records.

Neanderthals; they produced glue, made jewelry from eagle’s claw, decorated themselves with feathers, burned their own fires, drew pictures in caves, shaped instruments from seashells. With the new discovery, fiber technology was added to the skills of this extinct species. The research of scientists who discovered the last link of Neanderthal skills was published in Scientific Reports.

The brain of the Neanderthals can be compared with those of the modern man:
Bruce Hardy, the lead author of the new study, thinks there is evidence that the neanderthal’s brain power can be compared anatomically to the modern human brain. According to Hardy, twine and fiber technology in general are examples of unlimited use with limited tools. The archaeologist thinks that fiber technology is similar to language in this respect, stating that when a group starts bending the fiber, it can produce yarn first and finally reach the rope and more.

Evidence for the oldest textile and fiber technology prior to this discovery was obtained from the Ohalo II excavation site in Israel. These strings were 19,000 years old and linked to modern people. These strings were made with fibers twisted counterclockwise. In the Abri du Maras excavation area, archaeologists had previously found evidence of neandertals’ use of textiles in fiber form, but this was not enough for scientists to be sure. The situation is different in newly found strings because many fibers were first twisted into yarn and then twisted into twine.

The length of the discovered string is 6.2 millimeters; its width is 0.5 millimeter. The string was found attached to a 60-millimeter-long stone tool. Scientists think that the string is used for a bag that is used either to tie a sheet to a hilt or to carry the cutting tool. Twine was used 41,000 to 52,000 years ago. Microscopic examinations revealed that the string was made from cellulose. It is believed that this cellulose is made from a coniferous or leafless type of non-blooming tree.

How to pin a conversation in the iOS 14 Messages app

Migrant seek a dignified life outside shelter in Matamoros

Everything you need to know about V

Back View: Why Prince of Persia: Sands of Time