Home Tech When is the release of Rainbow Six Quarantine? See gameplay and details 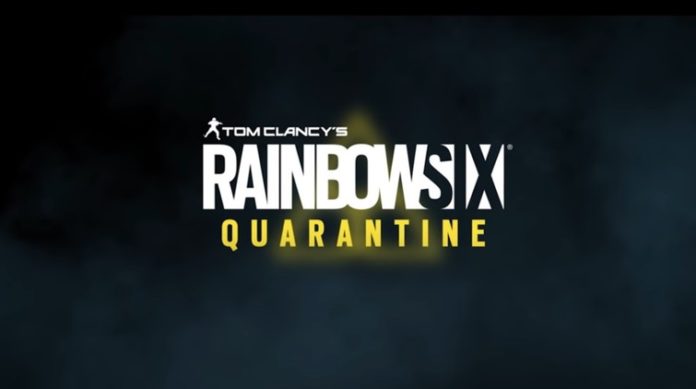 History, platforms and launch: check out what has already been confirmed and the rumors of the new R6.

The Rainbow Six: Quarantine is the new famous game franchise that emerged in the 90’s unprecedented game was first presented during the conference Ubisoft at E3 in 2019 . Unlike Rainbow Six: Siege , R6 Quarantine will put competitiveness aside, and bet its chips in a more cooperative environment, where players will form trios to face a global threat. Next, see more details about Rainbow Six: Quarantine, with data on its release date and gameplay. The game will be available for download on Playstation 4 (PS4) , Xbox One and PC , and for the new Playstation 5 (PS5) consoles andXbox X Series .

How is Rainbow Six: Quarantine?

Rainbow Six: Quarantine will bring a cooperative experience to play with friends. The game will still be a tactical FPS and will have several similarities to Rainbow Six: Siege, such as shootings and features, and Ubisoft promises that it will please both old and new players who want to start playing the franchise. Being a cooperative with three players, it is expected that a lot of teamwork is necessary to be successful in the missions, which, according to the developer, will be chaotic and unpredictable.

With no new gameplays released since the first trailer at E3, the latest information about the game comes from rumors leaked in early 2020 on Reddit . The documents show that Rainbow Six’s tactical style does remain in Quarantine. The missions will be based on observing, planning and acting, always making the player use his intelligence to take advantage of all the resources that the game will provide.

What is the story of the game?

The Rainbow Six: Quarantine storyline will be based on Outbreak, a limited event that took place in Rainbow Six: Siege in 2018, and will set aside the premise of soldiers fighting terrorists. The game will be several years ahead in the future, when an alien parasite is launched on Planet Earth. With that, it’s up to the Rainbow Six team to enter quarantine zones to deal with this mutant threat.

How many operators have already been confirmed?

Rainbow Six: Quarantine will feature existing operators in Rainbow Six: Siege. So far, only three have been confirmed: She, Vigil and Lion. The first two, by the way, were the stars of the game’s first trailer. The decision to take the operators goes far beyond your skills in Rainbow Six: Siege. Each character has its own personality, which draws the attention of the game’s fans, and which will add even more to the Quarantine storyline, even if they look different in a completely new context.

It is worth remembering that the documentation published on Reddit suggests that the game will have a total of 21 playable operators, and that they will be divided between the categories Assault, Recon and Support. For example, the operator She would be categorized as Support, while Vigil and Lion would be Recon. This leaked information has not yet been officially confirmed, but if it is true, it will be possible to see another 18 operators, such as Sledge, IQ and Gridlock, in action at Rainbow Six: Quarantine.

When is the launch?

Initially, Rainbow Six Quarantine was scheduled to be released in early 2020, before April. However, Ubisoft CEO Yves Guillemot said the plans have undergone a small change in order to give more time to the development of the new game. The game can still be released in 2020, but there is a possibility that this time could be extended until March 2021.

What platforms does it reach?

Rainbow Six Quarantine is confirmed to arrive on Playstation 4 (PS4), Xbox One and PC. Remember that it will also be available Playstation 5 (PS5) and Xbox Series X, due to the new launch window created by Ubisoft. The next generation of Sony and Microsoft consoles is expected to be launched at the end of 2020.

Instagram: we can now put several photos on a single Story!