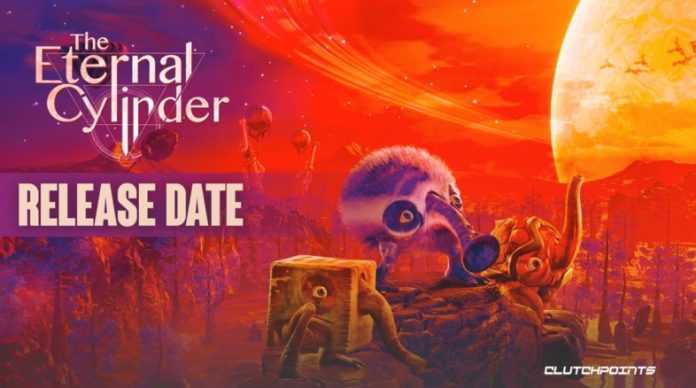 The Eternal Cylinder is a third—person open-world adventure in which you control a strange alien creature named Trebhum in a strange alien world full of dangers and other strange creatures. Playing as Trebhum, you have a trunk that you can use to collect items, a pair of legs to run and jump, and a spherical body that can roll to move faster. The barrel can also be used to blow water to solve some puzzles. As the game progresses, players can choose new parts or modify existing body parts by discovering various mutations, which allows them to interact with the outside world in different ways. Trebhum can also recruit new members to his squad by finding them anywhere in the world or hatching them from eggs. By collecting different Trebhum with a diverse set of mutations, you will make it easier for yourself to travel through a strange world.

While the game is an open world, the player can not be idle and just go where he sees fit. Instead, a constantly rotating Perpetual Cylinder forces the player to keep moving. Tower sets can interfere with the Cylinder’s rotation, giving players time to rest, but leaving the safe zone will cause the Cylinder to continue spinning, forcing the player to continue his run, using any mutations they have received so far to their advantage.

The eternal history of the cylinder

The game takes place in a distant world inhabited by a diverse extraterrestrial life, with a mysterious rolling structure known only as the Eternal Cylinder, constantly forcing its inhabitants to move across the landscape. It looks like the Trebhums have a way to stop the Cylinder once and for all, freeing their world from its rolling menace.

Apparently, Trebuhm have a trait that allows them to enter the mind of the menacing Eternal Cylinder, which allows the entire species to evolve over generations and eventually defeat the Eternal Cylinder once and for all.

Features of the new generation of Eternal Cylinder

However, by getting The Eternal Cylinder today and playing it in its current state, players will explore new content based on the recently released “Anniversary Update”, which adds two new creatures to the world — Baddo Groppa and Garukuk. mutation to help players stop the Eternal Cylinder, and new graphics options including 4K and ray tracing on PC. For a game that critics praise for a beautiful and creative open world, there are good enough reasons to release the game on next-generation consoles, just to experience the breathtaking world in its most beautiful form.

WHO launched an investigation in Wuhan, China