Home Tech Regisvid Cryo; how to defeat him in Genshin Impact 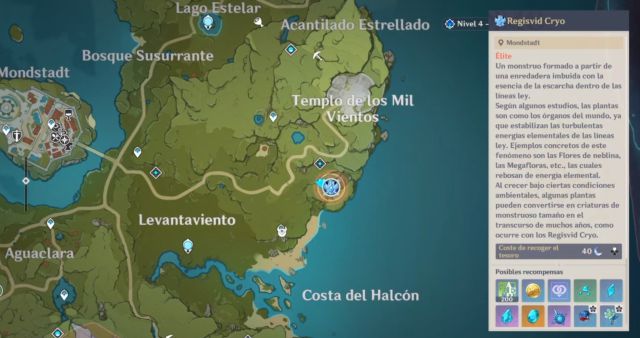 As part of our complete guide to Genshin Impact, we tell you how you can defeat the boss Regisvid Cryo from the new expansion of the game.

Regisvid Cryo is a “Blooming Frost Flower” that we will find in Genshin Impact as a boss. This is one of the new story missions that have been added with the arrival of version 1.2 of the game, which adds new characters, weapons and more. It is a worthy adversary, so below and as part of this complete guide we will offer you a series of tips so that you can defeat it without any problem and thus complete the story arc with Albedo.

How to defeat Regisvid Cryo

To begin with, it is important that we have some Fire and Electro characters in our team, since they are elements that work well against Ice. After that, of course, the ideal is that they have a fairly advanced level and that they are well equipped in terms of weaponry and artifacts. The battle will begin after a cinematic, since it is part of the story, so we will have to follow this series of recommendations and guidelines if we want to win and not perish in the attempt (in that case we can always revive our characters):

Attack non-stop, changing character until the great flower falls, when we take the opportunity to launch all our available ulti skills.
When it turns on itself and throws ice, we should try to avoid it as much as possible (having some cold / ice resistance potion on hand would be nice).
It will launch very damaging ice lasers and also area attacks, which we will see marked on the ground before they are carried out. For them, the same advice as in the previous attack example: dodge them and heal if they hit us.
The moment it begins to charge its most powerful attack, which creates a great blizzard around it, we have to run to one of the red crystals in the area, break it and thus create a barrier that protects us from the cold and damage.

Clarification for production capacity and 7nm from Intel