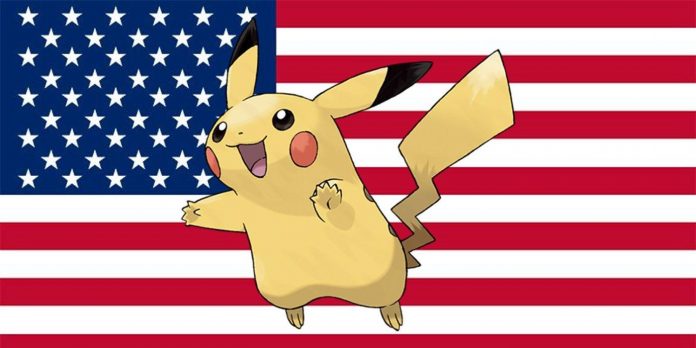 With every new Pokémon region taking inspiration from a new country, it stands to wonder what one based on the United States in general would be like. As such a large country, it encompasses many types of landscapes and terrain that could be perfect for a Pokémon region. With proper planning, it could make for an excellent future game.

Regions in Pokémon have seen several inspirations over the years. For example, Johto was heavily based on Japan, while the region in the upcoming Scarlet & Violet games takes inspiration from Spain. In fact, Pokémon has taken inspiration from the United States before. Unova was based largely on New York, while Alola was inspired by Hawaii in the record-setting Pokémon Sun & Moon. However, there are a few other areas of America that have not been touched upon that would make excellent inspiration for areas in a new region.

There are a few very distinct areas in America that could be incorporated masterfully into a Pokémon game. From terrain to local culture, there is a world of possibilities. Of all of the parts of the United States that have yet to inspire a Pokémon game, a couple of specific examples stand out.

The Louisiana Bayou Could Be A Home For Swamp-Dwelling Pokémon

Louisiana’s bayou and Cajun culture are truly unique and offer a flavor that can’t be found anywhere else in the United States. While the series has featured swamplands before in and around Sinnoh’s Pastoria City, the bayou of Louisiana is a completely different type of landscape. The uniqueness of the bayou would be sure to create a memorable Pokémon area, similar to Pokémon Scarlet & Violet’s Spanish-influenced region.

The bayou is wet, muddy, and dangerous, so it would probably be an area traversed through walkways rather than going straight through the swamp. The area would be teeming with Water- and Ground-type Pokémon, with some Bug- and Grass-types thrown in. Some new alligator or mosquito-themed Pokémon could also debut there. In addition to the bayou, the corresponding city could be based on New Orleans. One of the most famous cities in America, New Orleans’ reputation as a party city combined with its unique culture could lead to a Pokémon city unlike any that has been seen before. The city’s other inspirations of French architecture and Voodoo tradition could also play a role in its character.

Related: Pokémon Games After Pokémon Snap That Should Arrive On NSO Next

New Orleans was almost The Division 2’s setting, and Pokémon shouldn’t pass on the same opportunity. The culture of New Orleans combined with Louisiana’s bayou could combine for a truly memorable part of a region. No Pokémon game has featured anything remotely like it before, and the sheer uniqueness of the region is more than enough to influence a Pokémon game. After all, with how culturally relevant New Orleans has proven itself to be, it could provide boundless inspiration for a creative team.

As previously mentioned, Hawaii was used as a reference for the Alola region in Pokémon Sun & Moon. However, the other non-continental state, Alaska, has yet to inspire any part of a Pokémon game. While its distinctive characteristics may not be as famously known as Hawaii’s, Alaska can still provide plenty of inspiration.

The first thing that many people think about Alaska is snow and ice, which would enthuse fans of Pokémon’s infamously underpowered Ice-type. While Alaska is quite cold, there is much more to it than that, although it would still likely house many Ice-type Pokémon. It could also pay tribute to Alaska’s picturesque lakes and forests, representing a chilly but absolutely lovely Pokémon habitat. Likewise, Alaskan culture is very interesting, with influences from both the Alaskan natives as well as the Russians who settled there. The state has a different feel from the rest of the United States, and not just because of its geographical location.

Icy areas and Pokémon in the series have been rather underused since the beginning, and almost always restricted to the late game. An Alaska-based area could provide a lot of distinctive flavors to give the region its own feel, and maybe even a few ideas such as an Ice-type variant of a Fire Pokémon. Basing part of a region on Alaska could provide a player with a wide array of beautiful sights in addition to some truly unforgettable Pokémon habitats.

The Rocky Mountains are one of the world’s biggest mountain ranges, stretching from Alberta, Canada, all the way to New Mexico. Given the size and prominence of the region, it makes perfect sense to use it as an inspiration for a Pokémon region. Considering that the series has already featured prominent mountains such as Kanto’s Mt. Moon and Sinnoh’s Mt. Coronet, that lends more reason to use the Rocky Mountains as a template.

In addition to the mountains themselves, the region is also home to a number of national parks, most famously Yellowstone National Park, home of the Old Faithful geyser. Thanks to this, the Rocky Mountains area is home to all sorts of landscapes and types of terrain, creating several opportunities for creative design, as well as a new version of Pokémon’s Safari Zone if the developers decide to bring back that mechanic. It could go from a rocky mountainside to a crystalline lake over the course of one route among other possibilities, opening the possibility to design one of the most diverse areas in Pokémon history.

The Rocky Mountains may be one of the best possible inspirations for Pokémon worldbuilding. They are not only incredibly scenic, but the mountain range is large and diverse enough inland to inspire a region entirely on its own. Even if Pokémon never comes around to basing another region on any other part of the United States, the Rocky Mountains are a prime location for inspiration. It could even see some old Pokémon come back, like Venonat’s long-awaited return in Scarlet & Violet.

With Pokémon approaching its ninth generation, the series will keep needing to find inspiration for new regions. In that search, it is entirely possible that they could look towards the United States again. If that is the case, then there is certainly more than enough inspiration to build a region for a new generation of Pokémon.

The Cameos Of This ’90s Show Secretly Confirm That The Problem...

Will Graham & Desta Tedros Ref Interview: Their own league