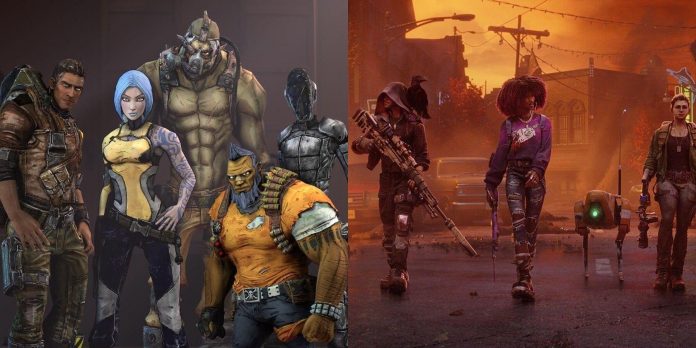 Arkane Studios’ latest game, Redfall, has recently attracted a lot of attention thanks to a brand new trailer and gameplay footage showing how the four announced main characters work together to kill hordes of vampires. That’s right, the initial reaction to the fact that a squad of four people is fighting off hordes of supernatural creatures reminds fans of similar shooters, such as the ever-popular Left 4 Dead.

At the same time, delving into the gameplay of Redfall and learning more information from the developers, players will see that the game has more in common with role-playing games-looters, namely with the Borderlands series. The story of Arkane shows that the developer succeeds in creating a vast world with interesting main characters who use various weapons and abilities. Therefore, it makes sense to make some comparisons with Borderlands.

RELATED: Redfall Could Be As Big as Starfield Thanks to Game Pass

Comparison of Redfall with Left 4 Dead

Anyone familiar with FPS games knows the Left 4 Dead franchise well. And many developers have tried to recreate the magic of the two games, the last iteration was Back 4 Blood. However, it seems that even the spiritual successor of Left 4 Dead could not recreate the feeling of satisfaction from completing the passage with four players working together.

When Redfall was first announced in 2021, it seemed like it was Arkane’s attempt to usurp Left 4 Dead from the cryptid-killing throne, but on closer inspection, Redfall aims to do more. At first glance, Redfall looks eerily similar to Left 4 Dead, right down to the look of the fight, and it definitely drew inspiration from the successful cooperative shooter, but also added some unique twists.

First of all, Arkane stated that Redfall is a single—player game that can be enjoyed with friends through co-op, but a story-oriented game largely allows you to play alone. Left 4 Dead, on the other hand, strongly encourages cooperative play, where each mission involves a group of four characters controlled by AI, if not another player. Fans of the series know how important teamwork is in Left 4 Dead, but they also know how inefficient AI is.

Redfall distanced itself from Left 4 Dead by not creating the need for a four-person team and not adding AI-controlled bots to the game if it is played in single-player mode. While some see this as a potential problem that could cause players to miss out on the camaraderie between the main characters, Arkane is trying to show that its newest game is a unique story experience, not a linear shooter.

How Redfall drew Inspiration from Borderlands

While it may not be noticeable at first glance, many of Redfall’s core gaming and multiplayer features seem to have been borrowed from Borderlands. Redfall will allow players to improve the abilities of characters using the XP system, and Arkane stated that the game has a loot system in which weapons of different rarity are displayed as different colors in the player’s inventory. The inclusion of free RPG level leveling elements and a loot system may not be exclusive to Borderlands, but it has popularized these features in modern FPS games.

Another example of Redfall’s similarity to Borderlands is the level design. Redfall will be set in an open world that will allow players to explore areas and fight enemies at their own pace, which is a new concept for the Arkane title. And, just like in Borderlands, Redfall will feature different types of enemies, from vampires to human cultists, probably of different strengths, scattered around the world.

The most controversial feature of Redfall is what makes it more like Borderlands. It was recently announced that although the Redfall campaign can take place entirely in co-op, it is designed to be played alone and will not include AI-controlled characters. Borderlands had the same feature, allowing players to choose the desired main characters with certain abilities and skill trees, and then send them out into the world alone, although usually the experience with friends and allies with other abilities is more fun.

It looks like Redfall is adapting many features from other popular shooters in an attempt to create a unique experience. Although Arkane has acknowledged the similarities between its newest game and other games, the developer promises that Redfall will be something more than just another copy.

Redfall will be released in 2023 for PC and Xbox Series X/S.