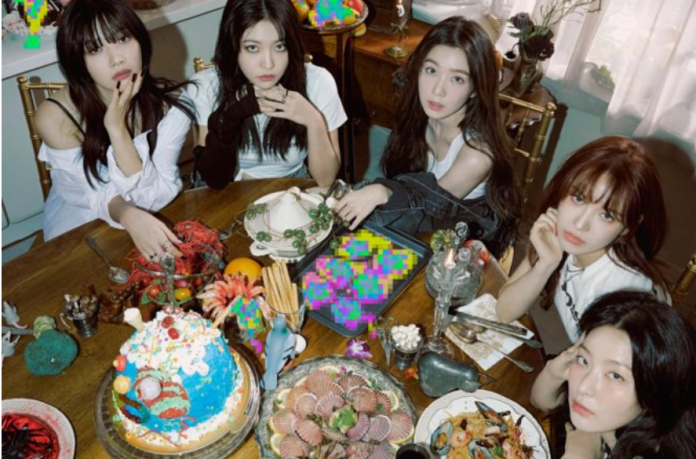 Red Velvet returned with their new mini-album “The ReVe Festival 2022 — Birthday” and a bright video clip for the main single “Birthday”.

On November 28, at 18:00 Korean time, the quintet shared a video clip for “Birthday”, the title track of their new mini-album “The ReVe Festival 2022 — Birthday”, released at the same time. Like their previous single “Feel My Rhythm”, the new track contains samples from another piece of classical music — “Rhapsody in Blue” by George Gershwin (1924).

Whimsical new visuals show how Red Velvet members are transported into a kaleidoscopic imaginary world built from giant pieces of chocolate and candy. Each participant also has her own surreal world, for example, one where Seulgi performs with a traditional Korean lion dancer, and another where Wendy sings in a garden modeled after a chessboard.

The new album includes four B-sides in addition to “Birthday”, namely “BYE BYE”, “On a Ride”, “ZOOM” and “Celebrate”.

“The ReVe Festival 2022 — Birthday” marks Red Velvet’s second domestic release this year, as well as the second installment of the “The ReVe Festival 2022” series, which began in March with “Feel My Rhythm”. At the time, member Joy shared that the band planned to release “a lot” of albums in 2022.

Last month, the main dancer Seulgi became the third member of Red Velvet to make her debut as a soloist, after bandmates Wendy and Joy, who released their first solo releases in early 2022.

In a five-star review of Seulgi’s debut mini-album “28 Reasons”, Rian Daly of NME praised the “regal elegance” of the idol throughout the recording, writing: “Seulgi has long established herself as an intoxicating and masterful performer in Red Velvet, and now she is ready to apply this experience to her bright moment.”

Pokémon GO in August: Date of all Tier 5 Raid Bosses...