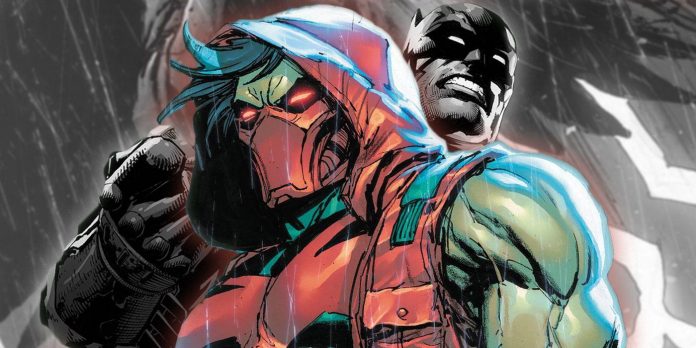 From the moment of his resurrection, Red Hood considered himself better than Batman. However, Jason Todd’s most outlandish weapon has already proved that he is, in fact, better than Bruce Wayne.

As Batman’s second Robin, Jason Todd worked as Batman’s subordinate. He helped Bruce defeat the Gotham crooks and developed a taste for violent crime fighting, which Batman considered questionable. Bruce tried to steer Jason away from his dirtier tactics, but unfortunately he didn’t have enough time for that before Jason was killed by the Joker. After his resurrection, Jason came to the conclusion that the only way to improve Gotham is to kill criminals, and he assumed the mantle of the Red Hood to fulfill his mission.

In Red Hood and the Outlaws: Rebirth #1, written by Scott Lobdell and illustrated by Dexter Soy, Red Hood’s secret weapon proves that he has mastered one thing Batman will never be able to: deception. Jason stylishly interrupts the Gotham mayor’s press conference by riding in on his motorcycle. Of course, Batman swoops in and interrupts, and Red Hood immediately gets into a fight with him. The fight remains mostly hand-to-hand until Batman tells the Red Hood: “You know you can’t win.” Jason sarcastically replies: “In a fair fight? Probably not. But deception? I figured it out. He then activates a stun gun embedded in the bat logo on his bib, which effectively stuns Batman. With Batman out of the equation, Jason can turn his attention back to the mayor.

Although the taser is somewhat awkwardly positioned on Jason’s chest, it proves his point perfectly. Batman tends to stick to fair fight tactics; even if he surprises the opponent with a gadget, he still adheres to what he considers ethical. The Red Hood, on the other hand, has no such doubts and probably never has. Jason grew up on the streets, so when he learned to fight, his only goal was to survive by any means. Dirty fighting has never been a problem for him, but for Batman it remains an unshakable rule. Jason defeating Batman by taking advantage of his unwillingness to cheat makes sense, and it will probably happen again and again in the future.

Despite the fact that Jason has dropped his weapon and is trying to reintegrate into the bat family, his irreconcilable differences with Bruce remain. DC fans will likely see Red Hood and Batman at each other’s throats again, and when they do, they shouldn’t be surprised when Red Hood cheats to get ahead.