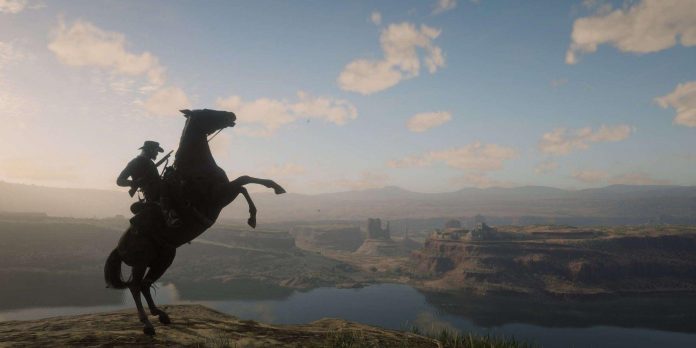 In the new video clip, the player somehow forced John Marston to escape from hitting the ground after falling from a horse in Red Dead Redemption 2. Red Dead Redemption 2 features one of the most extensive and detailed open worlds ever created in games. Even years after the game’s launch, players are still fascinated by its Western setting and everything it has to offer. Exploring the lands usually requires the use of a horse, and sometimes the player makes mistakes, but this video clip shows a miraculous rescue after he was unable to slow down his horse.

Red Dead Redemption 2 offers all kinds of customizations for horses to make them unique. Players can even clean their horse and get close to it. But when it comes time to go to the ground, the player controls the situation, and despite the fact that some horses are controlled better than others, riding in Red Dead Redemption 2 is realistic. What is unrealistic and barely believable about the game itself is how the player manages to crash into something, be knocked down and somehow avoid hitting the ground face first.

In a video clip posted on Reddit by persekarvatrimmeri on September 11, the Red Dead Redemption 2 player manages to capture what could be a once-in-a-lifetime moment in the game. In the video, the player rushes at full speed on a horse to a brown fence and tries to dismount before crashing into the barrier. Just like a horse hits a fence, and during the dismounting animation, John goes flying, which is normal in the game. What’s not normal is that John flips over the fence and lands on his feet.

The choice of realistic design in Red Dead Redemption 2 was both praised and criticized: Some players believe that the game is one of the most realistic games ever created, as many locations of Red Dead Redemption 2 are inspired by real places, while others believe that realism slows down the pace of the game. In any case, everything came together perfectly at this moment, and it seems that this is only possible if John is in a very specific frame during the dismounting animation when the horse collides with the fence. This version of the game is also a PC version.

This shows how much detail and care the developers of Rockstar Games have put into the game, that players are still discovering something new in 2022. While Rockstar has finally said goodbye to Red Dead Redemption 2 in order to focus on Grand Theft Auto 6, players are still enjoying roaming the American West.

The DualSense Edge controller is presented at the Gamescom opening ceremony...