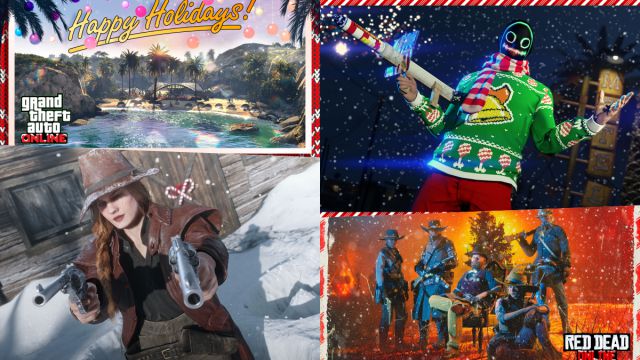 In the Rockstar Games titles, Santa Claus arrives with an arsenal of objects for our characters, without half measures.

Rockstar Games has announced the holiday events for GTA Online and Red Dead Online, their hit multiplayer titles. The North American company has wanted to wish the parties with themed weapons and other novelties. In the online side of GTA V, the city of San Andreas is already covered in the area. Businesses in the area have adorned their shops and vendors deal with their freshly received products.

Players will have the opportunity to take a selfie by the tree in Legion Square or even in your own attic, which is now decorated for the occasion. Also, and for a limited time only, you can get holiday gifts just for playing GTA Online. If you visit Southern San Andreas Super Autos between December 22 and 30, you will get a compact and lightweight Grotti Brioso 300 for free. As if that weren’t enough, those who play until December 30 will receive the following items:

As in GTA Online, the heavy snowfalls are not worse, but the Christmas spirit has invaded the United States. The streets of Saint Denis, liquor stores and distilleries have been dressed in the colors of Christmas and the voices of Christmas carols. If you visit the Advantages section in the pause menu you can get a series of exclusive gifts, such as coupons that will allow you to receive a very useful coat against the cold. In armories, the winter variant of the repeating Evans; You’ll also find the Krampus festive double-barreled shotgun variant, which temporarily lacks a level restriction.

But let’s not get confused: at this time no one is spared from violence in Red Dead Online. Virgil ‘Pastor’ Edwards, leader of the Seventh Generation Sect, is ready to wreak havoc. They perform the ritual of Mercy, which consists of bloodshed to ecstasy. Those with the bounty hunter license can go after him.

On top of all this, there are new Turkmen horses, including gray, black, sorrel, and pearl variants. Holiday versions of modes like Everything Counts: Bow & Arrow and Last Standing are back, offering triple RDO $ and EXP. On the other hand, bounty hunters can get double experience.

Both Red Dead Online and GTA Online are available on PS4, Xbox One, and PC.

James Gunn says Rocket will have big role in Guardians of...