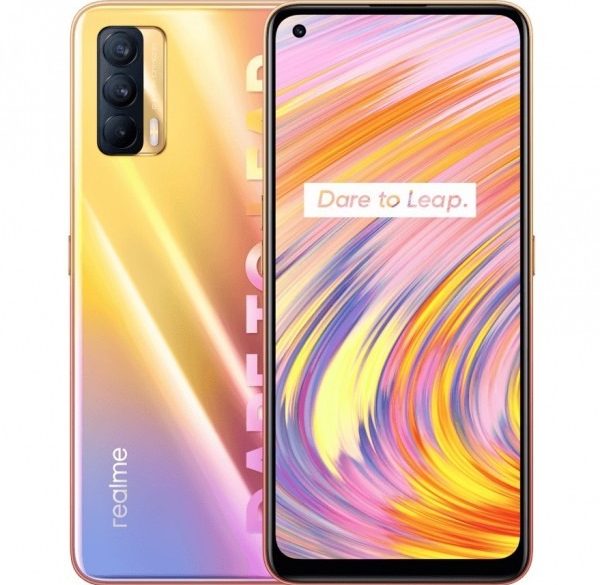 Realme V15 has officially appeared as expected. The V15, Realme’s first phone announced in 2021, has a 6.4-inch Full HD + resolution AMOLED display. The maximum brightness level of this screen with 180 Hz touch sampling rate is 600 nits.

The AMOLED panel in question bears the signature of Samsung. The fingerprint scanner is also integrated into this screen. In the hole in the upper left corner of the screen, it is possible to find the 16-megapixel front camera of the phone.

Behind the Realme V15 is a triple camera system. Here, the 64-megapixel sensor takes over as the main camera. An 8-megapixel ultra-wide-angle camera and a 2-megapixel macro sensor also complete the system. The phone has a super night mode on both the back and front cameras. Artificial intelligence, portrait mode, cinema mode and UIS Max mode are also waiting for users in the V15’s camera.

At the heart of the Realme V15 is the Dimensity 800U processor. This processor also brings 5G support. There is also a copper tube system for heat evacuation in the phone. The processor is accompanied by 6 or 8 GB of RAM. Only 128 GB is offered for internal storage. While the phone will come out of the box with Android 10 and Realme UI, Realme has promised to deploy Android 11-based Realme UI 2.0 in a short time.

A 4310 mAh battery gives the phone the energy it needs. The battery supports 50W fast charging. However, a 65W adapter will come out of the box.

The V15 is available in three colors, namely Crescent Silver, Lake Blue and Koi. It should be noted that the Koi-colored V15 is 3 grams heavier and 0.2 millimeters thicker than other colors. The back of this version is double-textured and double-paneled. Thus, light can be reflected differently from different angles.