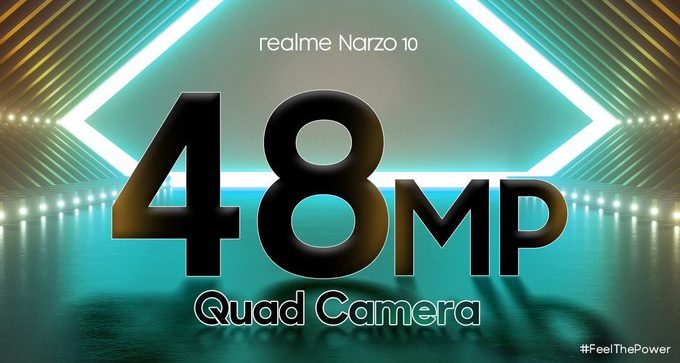 Realme, one of the many Chinese smartphone manufacturers on the market, is preparing to launch the Narzo series in India. In a very short time before the phone came out, some features about the camera of the phone appeared.

China-based smartphone maker Realme will release its smartphones, Narzo series, in India on March 26. The company also approved the names of two phones from this series: Narzo 10 and Narzo 10A.

In addition to the names of the models, the Chinese company has also announced that the model, called Narzo 10, will have four camera setups, such as the 48 MP main camera, just like the Realme 6i. This information about the phone was announced with the poster shared by the company’s official Twitter account.

Realme Narzo 10 and Narzo 10A
The company announced in the previous statements that Narzo 10A will have three cameras. In addition, both models are expected to come with a 5,000mAh battery and fast charging support.

As we said above, Realme Narzo 10 will have a 48 MP camera. Also, according to the news in 91mobiles, the device will be a re-branded version of Realme 6i. Narzo 10’s RAM and internal storage variants are not yet clear, but Realme 6i came with 3 GB or 4 GB of RAM and 64 GB or 128 GB of internal storage. In addition, it is said that the phone will have a 6.5-inch drop notch display and the 18 W fast charging support will be available on the phone.

Microsoft will delight iPhone owners with its new Xbox app

How Will We Use Bitcoin When The Apocalypse Comes?

Jared Leto Will Play The Joker Once Again