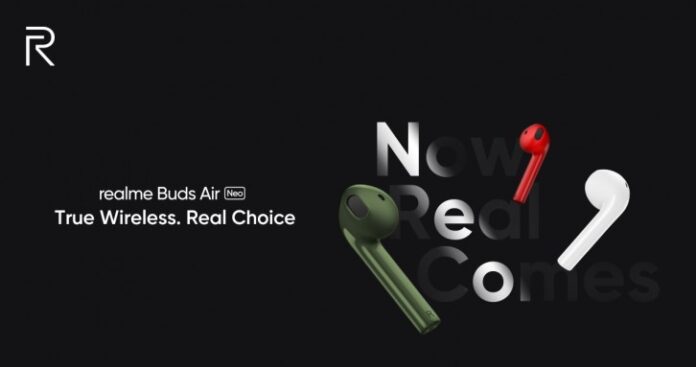 Realme Buds Air Neo features leaked shortly before launch. The model, which will be the new wireless headset of realme operating in our country, will attract attention with its features. In addition, realme Buds Air Neo price will be more affordable than its competitors.

The company introduced the new headphone series Buds Air last December. The model, which will be the new headset in this series, will be introduced on May 25. However, the product was leaked before it was introduced. It seems that the leaked images are visuals to be used in the promotion.

realme Buds Air Neo features
Starting to attract attention with its headphones, the company is preparing to launch its new model. A page was prepared on the realme India website for the company’s new headset. On this page, the details of the headset appeared. Looking at the design, it seems that the headset has a classic wireless headphone design.

The headset box, which will be charged via USB Type-C, will also support wireless charging. It will also be possible to direct the headset with the touches. These taps will provide call answering and ending, music play-stop, next song and transition to low delay mode. In low-latency mode, the headset will deliver 50 percent faster performance than normal use.

realme Buds Air Neo price
Realme Buds Air Neo, which has red, white and green color options, is said to be 2,999 Indian rupees ($ 39). Realme Watch and realme TV will be presented to the users with the headphones to be introduced with the event to be held on May 25.

Amazon electric van delivers on the streets of Los Angeles