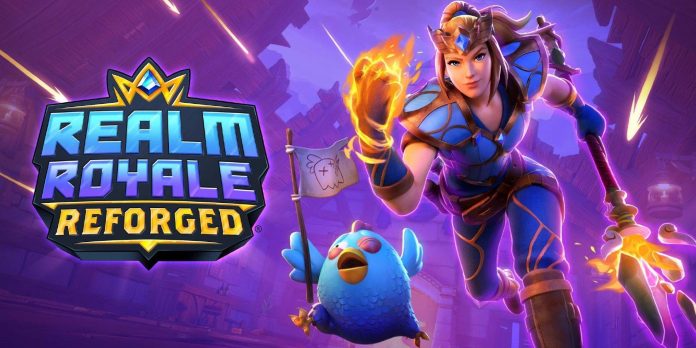 When Fortnite came out in 2017, the modern gaming landscape changed forever. This may sound a bit dramatic, but it’s important not to downplay how important Fortnite and its business model are to the industry. In the following years, elements of the live service found their application in most games, and the popularity of the “battle royale” genre only continued to grow. But where there is success, there are those who try to copy it, and although some manage to achieve the same level of success, most do not succeed. Unfortunately, Realm Royale Reforged was one of those games.

Developed by Heroic Leap Games and published by Hi Rez Studios, Realm Royale Reforged — originally just called Realm Royale — was a 2018 spin-off of the battle royale genre from Hi Rez’s Paladins. At the time of release, Realm Royale was quite well received by both critics and players, many of whom called the lack of buildings in the game a real advantage. However, the initial brilliance soon dissipated, and Realm Royale was soon lost in a sea of royal battles. But over the past few years, one enthusiastic team from Hi Rez has continued to work on the game, and a week ago it was relaunched, receiving the name Realm Royale Reforged.

The Biggest changes and additions of Realm Royale Reforged

The new Reforged update for Realm Royale is really massive, it brings a lot of tweaks, changes and new features to the game that bring back some of the most beloved mechanics of the early days of the Battle royale, as well as keeping it in line with modern requirements. improving the quality of life. The first big change in Realm Royale Reforged is the return of the armor system. A feature that was replaced by a dumb rune system, the armor is back and is better than ever. Players will now be able to collect, equip and upgrade helmets, breastplates, gauntlets and greaves, each of which gives them a unique positive effect to their abilities, for example, additional health or a faster recharge rate.

Another big change in Realm Royale Reforged is that abilities and weapons are now tied to the class system. Unlike allowing the player to take any type of weapon or equip any ability, players will now be able to use only those items that belong to their chosen class. For example, only magicians will be able to use the “Take-Off” ability, which allows them to fly, and only hunters will be able to use the brand new “Hook-Cat” ability. The same is true for weapons: Sniper rifles are only available for assassins, and long swords are only available for warriors.

In addition to the abilities and weapons that were already available in Realm Royale Reforged, the developer added several completely new ones. The Assassin, Warrior and Mage each get a new combat ability: The Assassin can send bait, the Warrior gets superpowers with the help of the Furious buff, and the Mage gets the opportunity to shoot a destructive fireball. The Mage class also has access to two completely new weapons for each class: the Fire Staff and the Ice Staff. An automatic sniper rifle has also been added to Realm Royale Reforged, which can be used by any class.

Realm Royale Reforged has also brought a number of general changes to the game. One of the most notable is the removal of duos and squads, which was done in an attempt to keep the maximum number of players in each match. Class chests have also been added to the game, which contain the aforementioned class weapons and abilities. The Storm circle will now be visible to players as soon as they enter the match, which is an attempt to focus the action from the beginning and reduce player downtime.

Realm Royale Reforged is available on PC, PS4, Switch and Xbox One.

Dying Light 2 Outlines Its Post-Launch Roadmap; They Promise At Least...

How Can You Find People You Are Curious About In Videos...