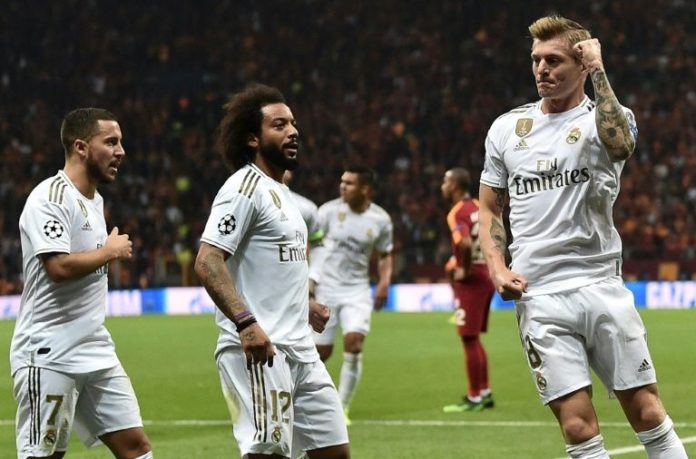 Real Madrid solved with victory (1-0) its delicate commitment in Istanbul against Galatasaray, this Tuesday on the third date of Group A of the Champions League, adding three points that return the white team to the race for access to the round of 16 of end.

A goal by German Toni Kroos in the 18th minute gave air to Real Madrid coach Zinedine Zidane and a team that had just lost in the League against Mallorca, and only added one point in the Champions League.

With three points on Tuesday, Real Madrid beat Bruges and Galatasaray to place second behind Paris SG, who beat the Belgian team 5-0.

“You have to win yes or yes. There is no other,” Captain Sergio Ramos had exclaimed on the eve of the crash. Said and done, even if it was for the minimum.

“This victory is good for us. We are happy for this victory, which is deserved anyway. It is true that we would have liked to also score that second goal, and that third goal that allows you not to suffer,” Zidane told a news conference.

A rapid triangulation in attack between Frenchman Karim Benzema and Eden Hazard, the only two white soccer players candidates for the 2019 Golden Ball, resulted in a pass back from former Chelsea player for Kroos, who coming from behind spliced ​​dry from the heart of the area to overcome Uruguayan goalkeeper Fernando Muslera by the squad.

Before the goal of Kroos, the Romanian exdelantero of Córdoba and Deportivo de La Coruña, Florin Andone forced with a crossed shoe a meritorious intervention of the questioned Belgian -Thibaut Courtois, who returned to be employed with class before Andone himself a minute later ( eleven).

“We played with a lot of character. (Courtois) He made two important stops twice (from Galatasaray) in the first half. He saved us. Thibaut is important in this type of match,” Zidane said.

Real Madrid was more ambitious in the second act, and enjoyed its best occasion with a shot at Hazard’s crossbar, again enabled by Benzema in a play initiated by Uruguayan steering wheel Fede Valverde (65).

In the last quarter of an hour, Brazilian Vinicius Jr. and Colombian James Rodríguez entered Hazard and Valverde respectively.

But finally the score did not move and Real Madrid and Zidane received a breath of oxygen in the hell of Istanbul, where they still have options to return this season, in May for the final of this edition of the Champions League.