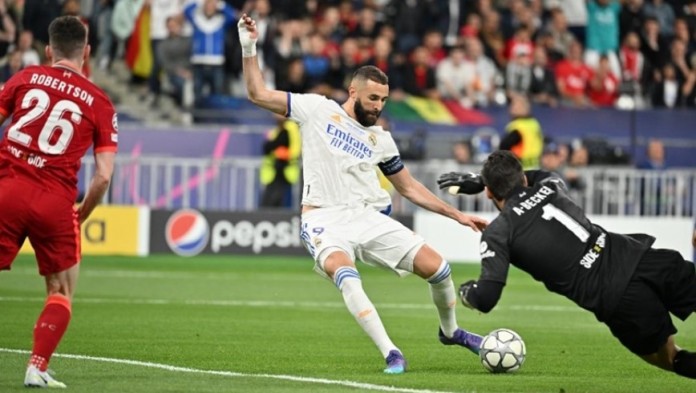 In the number one tournament of European football at club level, the final of the 2021-2022 season was played between Liverpool and Real Madrid at the Stade de France in Paris, the capital of France.

The first half of the match was dominated by Liverpool.

In the 21st minute, Liverpool approached the goal with Sadio Mane. Mane’s kick, which entered the penalty area from the left wing, was hit by goalkeeper Thibaut Courtois, and the ball returned from the post.

The ball centered on the right wing by Trent Alexander-Arnold in the 34th minute created a danger in the Real Madrid castle. Salah’s head shot in the penalty area, the leather round went to Courtois’s lap.

In the 43rd minute, Real Madrid caught their first dangerous position in the match. Karim Benzema, who controlled the ball near the goal area with a long pass, faced goalkeeper Alisson Becker. Liverpool’s defense intercepted the ball, which the French forward sent towards Federico Valverde. Benzema sent the ball into the nets that he found in front of the carrom. However, the offside flag raised position for Benzema was not worth a goal after the Video Assistant Referee (VAR) review.

The second half of the fight was also under the control of Liverpool. However, Real Madrid was the side who scored in the first shot on target in the night marked by the saves of the goalkeeper Courtois.

In the 64th minute, the goalkeeper Courtois did not allow the goal, with Salah’s left foot in front of the penalty area towards the corner.

In the 80th minute, the ball left by Salah from the ground to the penalty area went to Diogo Jota. On Jota’s kick, Courtois took the leather ball into the corner.

Liverpool came very close to the goal in the 83rd minute. Egyptian football player Salah, who met the ball in the penalty area, got rid of his opponent and faced Courtois. With Salah’s kick, the ball went to the corner with the intervention of the Belgian net keeper.

There was no other goal in the remaining minutes and Real Madrid won the match 1-0 and reached the championship.

Real Madrid reach the trophy for the 14th time

Real Madrid, the most successful team of the “Giant League”, added another Champions League trophy to its museum.

Italian Carlo Ancelotti made history as the first coach to win the Champions League 4 times.

The UEFA Champions League final started with a delay due to the prolonged entry of fans and security reasons.

The start of the final match, which was postponed three times, was held at 22:36 instead of 22:00 CEST. Meanwhile, the players went back to the field and continued to warm up.

Long queues formed at the entrance of the stadium before the match. The gates were kept closed for a while as many ticketless fans tried to enter the stadium. Some fans entered the stadium by climbing the iron railings.

The French police sprayed pepper gas on the fans waiting to enter the stadium.