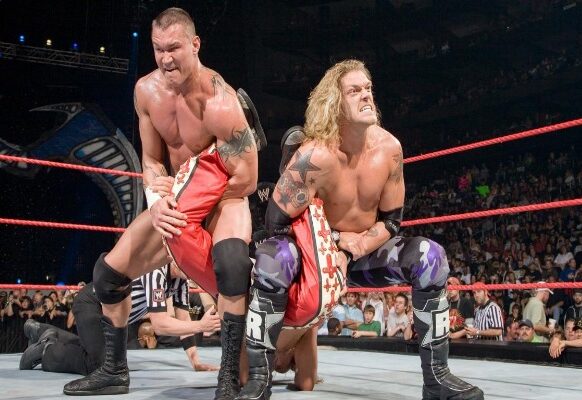 The Rated RKO Story in WWE

WWE Backlash will host the best wrestling match ever seen that will pit “Rated R superstar” Edge vs. “Legend Killer” Randy Orton in a match with a rivalry that borders on the personal, but that has not always been the case as there were a time when Randy and Edge formed a great team called “Rated RKO”.

The team’s start: their rivalry against D-Generation X

After this they went for the championships in pairs that at that time were supporting Ric Flair and “Rowdy” Roddy Piper, in the first attempt they did not succeed due to the interference of DX. In the following week in WWE RAW they asked for a rematch and after attacking Roddy Piper before the match due to this the match became a Handicap Match, being the “nature boy” defeated by Rated RKO and becoming the new champions in pairs.

The following week in WWE RAW, Rated RKO and MNM faced off and defeated DX and Hardy Boyz. In Survivor Series the Rated RKO team (Randy Orton, Edge, Johnny Nitro, Gregory Helms and Mike Knox) ​​faced the DX team (Shawn Michaels, Triple H, Matt Hardy, Jeff Hardy and CM Punk) winning the DX team the fight. For its part Lita (manager of Rated RKO) lost the Women’s championship against Mickie James, after this Cryme Tyme appeared to humiliate Lita when they began to sell the most intimate things of Lita to the respectable, thus withdrawing from professional wrestling . In the post-Survivor Series WWE RAW, Randy and Edge defeated Flair, causing him to bleed. After this DX affirmed that the rivalry between them and Rated RKO became personal.

Road To WrestleMania 23 and end of Rated RKO

In New Year’s Revolution 2007 Rated RKO they held the tag team championships after the fight ended in no-contest due to “The Game” injury to the quadriceps. At the Royal Rumble, Shawn Michaels took revenge on these two by removing them from the fray. On Raw they lost the titles against John Cena and Shawn Michaels. At Wrestlemania 23 both fighters unsuccessfully participated in the Money in the Bank fight won by Mr Kennedy, at WWE Backlash they fought a “Fatal Four Way” alongside Cena and Michaels in which Cena retained the WWE championship. The team broke up because Edge was transferred to SmackDown.

After this they had a sporadic meeting making a team, but never something serious.

During the last edition of the Royal Rumble we saw one of the best comebacks in WWE. Edge was back in the world of wrestling since his last match in 2011. When he made his appearance in the battle royale, he met with Randy Orton, but the alliance was short-lived… Edge eliminated Randy Orton. The next day in WWE RAW they began their rivalry facing WrestleMania 36, ​​where the two faced each other in a Last Man Standing match. Edge turned out to be the winner of the match, and apparently in the upcoming WWE Backlash PPV, the two fighters will continue their rivalry.

Rated RKO was a very good team that had an excellent rivalry with DX. Despite the fact that they are not going through their best now, we must remember how good friends these two magnificent fighters have been.