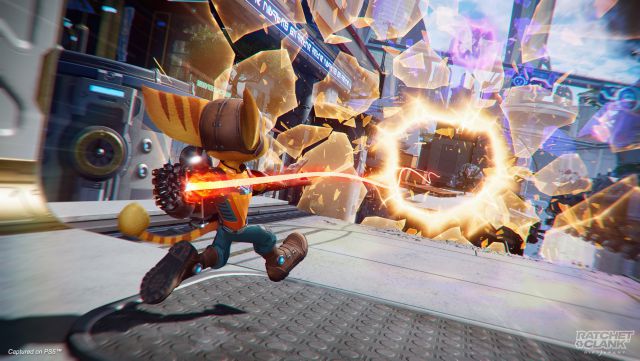 Ratchet and Clank wants to level up. The Insomniac saga, which has always had a very good reception among the press and the public, makes the leap to the new generation of consoles with A Dimension Apart, the exclusive title for PS5 that wants to be the welcome door to the Next Gen. During Last week we were able to attend a new gameplay of the game, which you can see commented on in the video that leads this article, and talks with different important members of the development team. The result, an ambitious title that wants to hit hard. The prospects are unbeatable. Time will tell us if it succeeds.

See our gameplay commented in the video that heads the article

The game begins with a declaration of intent. Clank, an inseparable friend of Ratchet, explains how he feels about him and highlights the power of friendship. In addition, he has a gift prepared: a gadget called Sizer, capable of allowing travel to other dimensions and parallel realities in which our favorite lombax can search for his relatives. It is not a new device, and we have already seen it in games like Armed to the Teeth or Trapped in Time among others, but here it serves as a starting point once Dr. Nefarius – another old acquaintance – appears and takes it away.

Chasing Nefarius is when we start to see a first-rate display of action. With Racthet we start grinding on different cables while we are chasing the enemy’s ship and everything collapses around us. Do you remember the opening scene from Marvel’s Spider-Man, also from Insomniac? There’s a lot of that here, but in Pixar format. And it is not said as something recurrent that we use – perhaps too much – in the press as a quick comparison. It is said because it is spectacular how you see what you see.

The sequence gives way to the most unbridled action. The festival of contrivances, explosions and jumps gives way to a salad of first-rate shots. We see a display of weapons of all kinds in the hands of Ratchet that is worth knowing. From weapons that load and fire a huge volley to others, like shotguns that, depending on what we press the trigger, launch one or two projectiles. Not to mention others that serve to hinder, filling with grass, the enemy.

Southampton Appointed a New Coach 2 Days Before The Visit to...

Nintendo Blocks More Than 1,300 Music Videos From A YouTube Channel