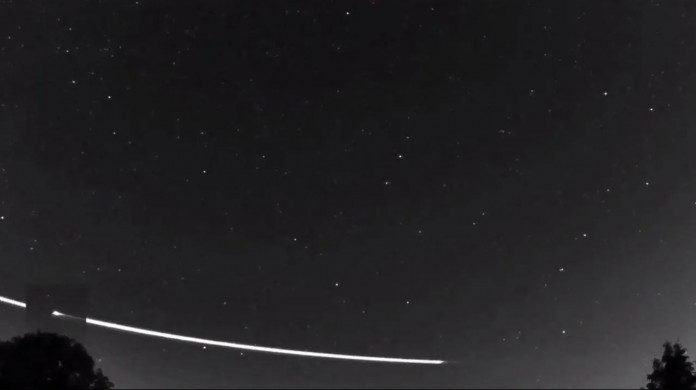 One of the rare space events, Earthgrazer, was spotted in the atmosphere by sky watchers. Here is the image taken…

Eartgrazer, known as a meteorite that enters the Earth’s atmosphere and then comes out again, is considered one of the rarest natural phenomena. This situation, which was last seen in 2017, was recently re-imaged by chance. On November 9, 2021, skywatchers spotted the meteor traveling 180 miles (about 300 kilometers) across 3 states.

Skywatchers in Georgia and Alabama captured a spectacular glowing image of Earthgrazer as it entered the atmosphere on Tuesday. The fireball was seen on 9 November at 18:39 Eastern time. First seen above Taylorsville at 38,500 miles (61,960 kilometers) per hour, the meteor was heading northwestward 55 miles (89 kilometers) above Earth.

Earthgrazer images shared by NASA
As NASA Meteor Watch explains on its Facebook page, the fireball was so bright that some observers were able to distinguish it even in cloudy weather. The inclination and trajectory of the object were determined by the images taken by three separate meteor cameras belonging to NASA in the region.

According to NASA, Earthgrazer entered the atmosphere at an angle of 5 degrees from the horizontal and traveled for a long time. NASA Meteor Watch made a statement about the length of the path in its Facebook post. He said the meteor’s trajectory was too long for the automated software to process all the data, and the team ran another piece of software code the next day.

When calculating the trajectory of the fireball, the initial software calculated this path to be 91 miles (147 kilometers). But after running the second software, they determined that the distance was actually 180 miles (about 300 kilometers). Updated accounts point to Lufts, a town in southern Tennessee, for the journey’s endpoint. So the meteor flew across 3 states.

Due to cloudy weather conditions, the size of the meteor could not be estimated. Although the Earthgrazer fireball’s journey was surprisingly long, skywatchers in South Carolina found that on May 14, 2014, an Earthgrazer had traveled 290 miles (about 467 kilometers) through the atmosphere before burning up.

What do you guys think of Earthgrazers? Does it pose a danger to the world? You can share your ideas with us in the comments.

Interesting Request from Aquarium in Japan: Video Conferencing with Eels