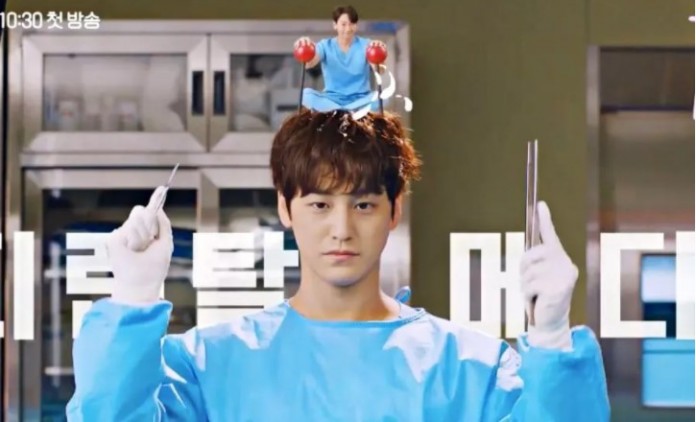 The exciting news released in March of the official return of the famous actor, singer and dancer Rain to the K-Dramas starring the fantasy story Ghost Doctor, caused even more stir when it was known that it would also feature the participation of Kim Bum as co-star, both accompanied by the renowned UEE in the lead female role and Son Na Eun.

Ghost Doctor is about two doctors who couldn’t be more different in abilities and personalities, but who end up combining spirits and bodies in a confusing supernatural possession. Rain takes on the lead character named Cha Young Min after his last job Welcome 2 Life in 2019. While Kim Bum will be seen on screen as Ko Seung Tak, UEE will play Jang Se Jin and Son Na Eun as Oh. Soo Jung.

Cha Young Min is a medical professional considered a genius in the field of cardiothoracic surgery, but unfriendly and selfish. One day, he is involved in an unexpected and unusual case that will result in his spirit possessing the body of resident doctor Ko Seung Tak. Amid this chaos is Oh Soo Jung, an intern who believes in supernatural phenomena and miracles despite studying medicine.

With a release date scheduled for January 3 on tvN, Ghost Doctor produced by Bon Factory (Master’s Sun, She Was Pretty, What’s Wrong With Secretary Kim and Encounter), directed by Boo Sung Chul (Heirs and Our Gap Soon). ) and written by Kim Sun Soo (Live Up to Your Name), has already formally started the promotions stage by releasing its first official images and videos.

A few days ago, the first photographs of Rain as Cha Young Min, a highly regarded doctor with a good physical appearance and an extraordinary resume that makes him behave arrogantly in front of others, circulated through the media and social networks. However, he is expected to go through a transformation after suffering an accident that turns him into someone he is not, as another of the images released by the K-Drama production apparently shows.

In the first teaser for Ghost Doctor, along with Rain, Kim Bum also appears in a funny sequence of images, in which it is explained in a funny way how Cha Young Min takes control of Ko Seung Tak’s body during an operation as if It is about driving a vehicle, while the latter gives him a disapproving look. It all ends with Rain saying over the phone, “A medical drama of body hire. ‘Ghost Doctor‘ opens in January. “

Apex Legends Mobile: How Crypto Differs in the mobile version of...