Home Entertainment Ragnarok: How Did Thor Finally Get Mjolnir?

Ragnarok: The second season of Ragnarok premiered in late May on Netflix and the plot ends with one of the most anticipated moments by fans: Magne finally taking the first step towards his hammer Mjolnir and, consequently, his future as Thor.

The Norse God’s path began early in the season when he asked blacksmith Harry to build a Mjolnir. However, to her frustration, Magne is unable to get the hammer to work properly once it’s done. Odin makes it clear that it is not possible to simply make a Mjolnir, he “must be worthy”.

To make the hammer work, Magne invades the Jutul house with the aim of using “eternal fire”, following the story of a prophecy. The idea fails and Vidar, patriarch of the Jutul, arrives home and finds him, resulting in a fight and the giant’s death. Loki, Vidar’s biological son, loses confidence in his brother, who gives up his powers and returns to being human.

After a while, Magne realizes his importance to the battle and fights with other gods to regain his powers and get the hammer. Finally, after discovering the giants’ treachery, Magne finally manages to summon his powers and use the hammer, destroying Fjor and Ran’s car, who manage to make it out alive.

It’s not yet known whether the series will return for season three, but the final episode left a good gain, with Laurits releasing the serpent Jörmungandr to let it grow in order to circle the world and kill Thor.

So, is he already looking forward to seeing how the brothers will face off? 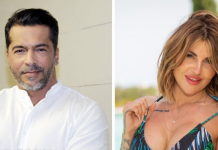 Before the “Island of VIP Temptations”: Aurelio sexted a seductress