Home Entertainment Raft: how to get to the radio tower 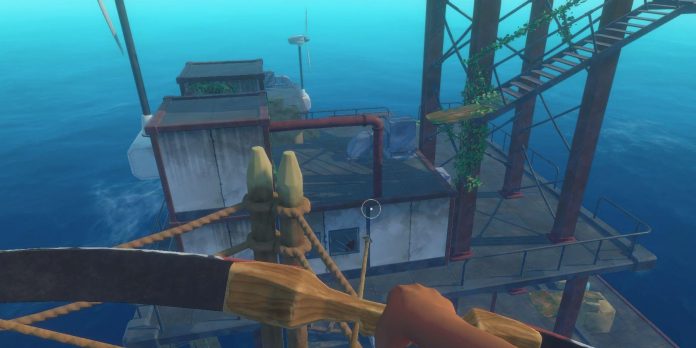 Raft is a survival game in which players will drift across the sea, forcing them to rely on rescue to stay alive. On their journey, people will come across several islands where they can find valuable goods such as food and wood.

However, there is something to do in the Raft, except to wander aimlessly. Players can find out what catastrophe has brought the world to a state where only a wide blue sea dominates the horizon. To start the story mode in Raft, the rafters must first get to the Radio Tower.

RELATED TO: Raft: How to Get Algae

How to get to the radio tower on a raft

To get to the Radio Tower, players need to have a receiver. This item will receive radio signals and transmit their location to the screen (marked in blue) along with some nearby islands (marked in green).

Once the receiver is built, the rafters will receive a new entry in their log. Press the T button to open it, then enter the generated numbers into the machine (in the log they are displayed as #XXXX, where XXXX are the required numbers). A blue dot should appear telling the players where they need to go.

After people have approached the blue dot, the radio tower should be visible from afar. It looks like an abandoned object, so it’s hard not to notice it.

How to get a receiver

To receive and use a receiver in Raft, players need to:

Get a drawing: receiver from floating barrels Examine the receiver, antenna and battery in the research table by inserting: A plastic mounting plate, a hinge, a scrap Bolt, a copper ingot Create one receiver, three antennas and one battery. Make a higher floor on the raft. The receiver will work only if it is placed at least one floor above the foundation. Create a battery and put it in the receiver. Now the machine can be turned on, but not yet used. Don’t forget to turn off the gadget as soon as the players finish using it; otherwise the battery will run out. Prepare the places for the antennas. The antennas should not be placed too close to the receiver or to each other. The receiver will tell the players which antenna is installed incorrectly as soon as it is turned on. After completing the setup, enter the numbers in the player log. The receiver will show a blue dot on the screen if the numbers are entered correctly.

What to collect on a radio tower on a raft

Apart from some trophies, the most important items that players must collect in the Radio Tower are:

A headlamp is an item that can be worn that can help players travel to the dark depths of the sea, a recycler is a machine needed to make garbage cubes, and Tala is a new playable character in Raft.

After studying the Radio Tower, the rafters will receive a new set of numbers that will lead them to the next location, Vasagatan.

Raft is available on PC.